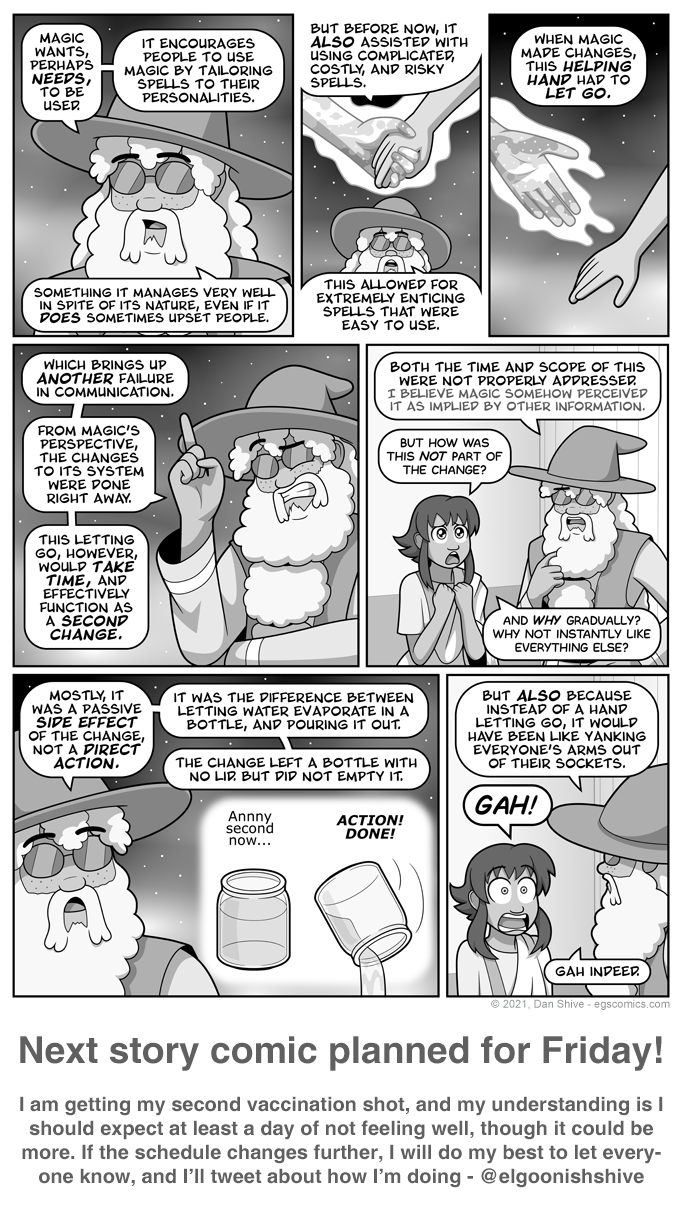 I hope it's agreed that this page is a better one to leave a cliffhanger on than the previous one, as it isn't really much of a cliffhanger beyond the expectation of further magic talk. It actually addresses what's up, why it's up, and what the delay was all about.

Naturally, it's possible there wouldn't have been an effective "second change" if this had been planned in 2018, but I do like the explanation here. I also like the hand holding bit, even if it makes me so weirdly sad to see a cosmic space hand let a smaller hand go.

It's my own fault for bringing up layers of translation, but I think I got people a bit too in the mindset of "things wind up garbled through a translator" and wondering why magic isn't messing up proper nouns and grammar and the like.

Grammar and words aren't really the issue. It's more the simplification, and I'm going to attempt to make another comparison: Localization of TV shows from other countries.

Here's an example for you from an anime I quite like called Bofuri (it's possible this is just an excuse to talk about one bit of localization I found interesting).

In this example, a character is very excited about something they're about to see, and they express this by saying "doki doki!"

Like, that's it. Doki doki. In Japanese, it is a term for the sound of a beating heart.

Now, how does one a) dub that in English, and b) make it work in context, keeping in mind that there's only four quickly spoken syllables to work with?

One could try sticking to signifying a heart beat, but what would that be in English? "bump bump"? The intended audience would be baffled.

The dub went with "so exciting!", which works excellently, but is not a reference to a beating heart. The beating heart wasn't a critical point, what mattered was the character was excited, but something was arguably lost in that translation because there wasn't a sensible English equivalent to what was being said.

Now imagine a massive amount of information arranged in something that doesn't even come close to resembling a spoken language having to take the form of not only a short paragraph, but a short paragraph that will make sense to the intended audience.

Magic has grasp enough on language to make coherent sentences (if sometimes overly verbose or roundabout, something I most assuredly cannot relate to in the slightest), but it can run in to trouble with what it leaves in and what it leaves out in the editing process.

Oversimplified and put in another way, it's like there's some really determined, but ultimately not-great, localizer trying to help people communicate with magic.

And if I've convinced no one of anything with this, that's fine, I got to talk a bit about Bofuri.

Incidentally, as I mentioned, I originally wrote a lot of details about trying to communicate with magic in the comic itself. It included all sorts of details, but ultimately, I think it's better to keep things going, and leave that for commentary / Q&A.

Ooh, especially for Q&A. I want to do one of those after this arc. Right, forget I tried to explain anything, and if you're still confused, FANTASTIC, I can work with that.