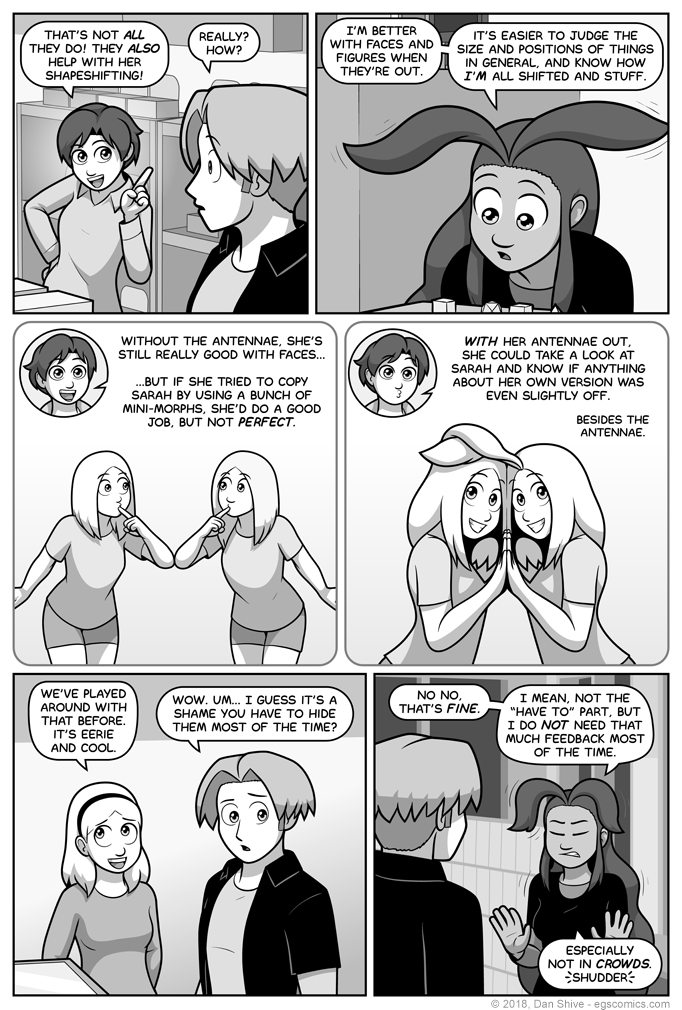 - Hugely relevant to Grace's initial reaction to Sam long ago

Speaking of Tedd, she's really needed for this moment because Grace would have stopped explaining after the last comic.

Grace is okay explaining why she's using her antennae in this context, and elaborating in a way that helps Justin understand (and possibly to raise his spirits). Grace is not hyped to talk about her antennae the same way Tedd is, however, and we wouldn't have naturally gotten THIS information without Tedd nerding out about it.

Panel three was tricky, because the whole point is that Grace is REALLY CLOSE to looking like Sarah, but there are imperfections. In my style, that's... That's a difficult thing to convey, right there.

Having said that, Grace, on the right (from our perspective), has the following mistakes in panel three:

It's been my own headcanon (authorial intent canon?) for years upon years now that Grace would have more trouble with crowds if she had to have her antennae out all the time.

The exact reasons why varied, however. I'm not sure when I settled on things related to spatial awareness and faces and such, but I also considered more vaguely defined "sensing" of other people and feelings.

Which is effectively intact, but now there's more of an explanation for it. Everything talked about in today's comic would naturally make her more aware of people's facial expressions and body language. This would all be open to her personal interpretation, so she could still misread them, but she'd be more aware of them.

That on top of this general extra awareness of everything around her, and it's probably a really good thing she sorted out how to hide her antennae before she started school.