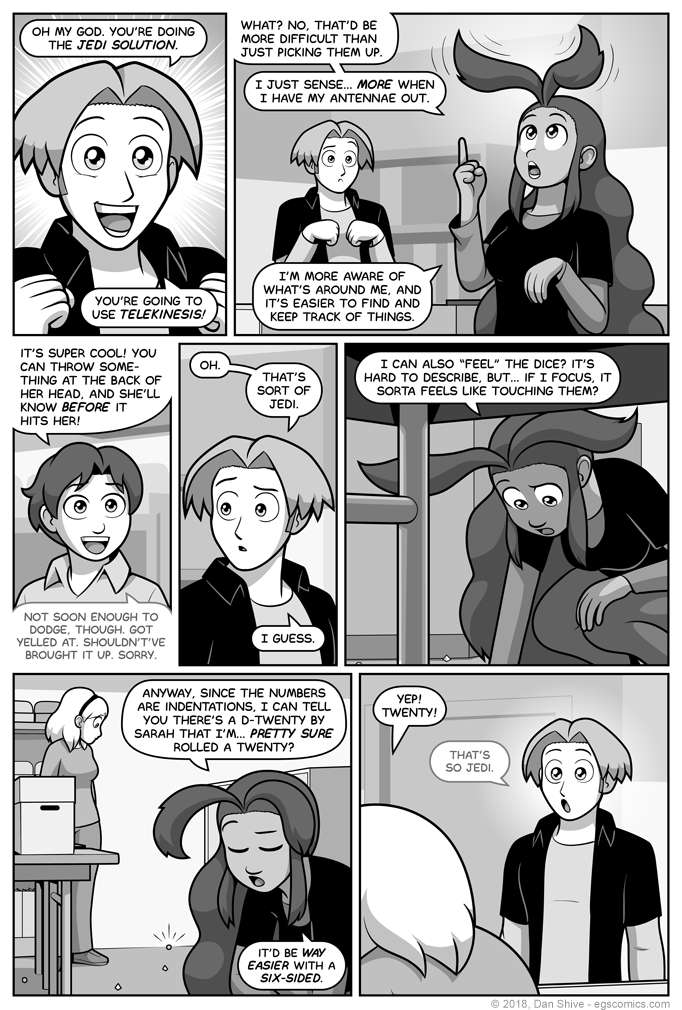 That moment when you overestimate your girlfriend's ability to do a cool Matrix dodge and wind up sleeping on the sofa for a bit even though you normally sleep in separate beds anyway.

EDIT - Tedd says "got yelled at" now, which used to say "big fight". This change was made because misinterpretations ran rampant, and all I wanted to imply was that Tedd did something stupid and rightfully got yelled at for it.

Toss this onto the "I've wanted to get this information out for years" pile, and there's still a bit more to it.

Granted, it's good it took years. In that time, I've better sorted out what exactly is different for Grace when the antennae are out.

The ability to "feel" objects around her just makes sense to me. Imagine trying to hold something and move it around exactly how you want without some sort of feedback, or even feeling it before picking it up.

Grace's "sensing" is basically just her getting that feedback without actually moving the thing she's sensing.

Panel six got rewritten a bit after I tested touching twenty-sided dice myself. She was originally more certain, but if what she's sensing is similar to touch... Yeah, that's easier said than done. About the only reason she's pretty sure it's a twenty is because of the width of the indentation.

Early on in sorting out this storyline, one of the tricky things was figuring out who this was going to be explained to.

On its own, not super difficult. Of Grace's friends, only Tedd, Sarah, and Ellen would definitely know all this (Elliot probably knows, but not necessarily). Any other of her friends in "the know" could be a candidate for having this explained to them.

Add in the complication of "where" and "why", however, and the challenge became "how does this happen within the context of the story without seeming totally tangential".

Worth noting is that I specify "early" in sorting out the storyline. There could be other reasons I said "yes" to the comic shop and it being Justin this was explained to (beyond Star Wars references).

I'm just pointing out that I once considered things like having a box of stuff fall over in Tedd's basement and trying to justify why Sarah didn't know all this already.

I wanted Sarah to say "critical" in the last panel, but then I'd be making the comic more difficult to understand for anyone who's not the right kind of tabletop RPG nerd.

Specifically, a naturally rolled twenty is commonly referred to as a critical, while a 1 would be a"critical fail". By "naturally", I mean the dice actually showing a 20, and not applying a +2 to an 18 or something.