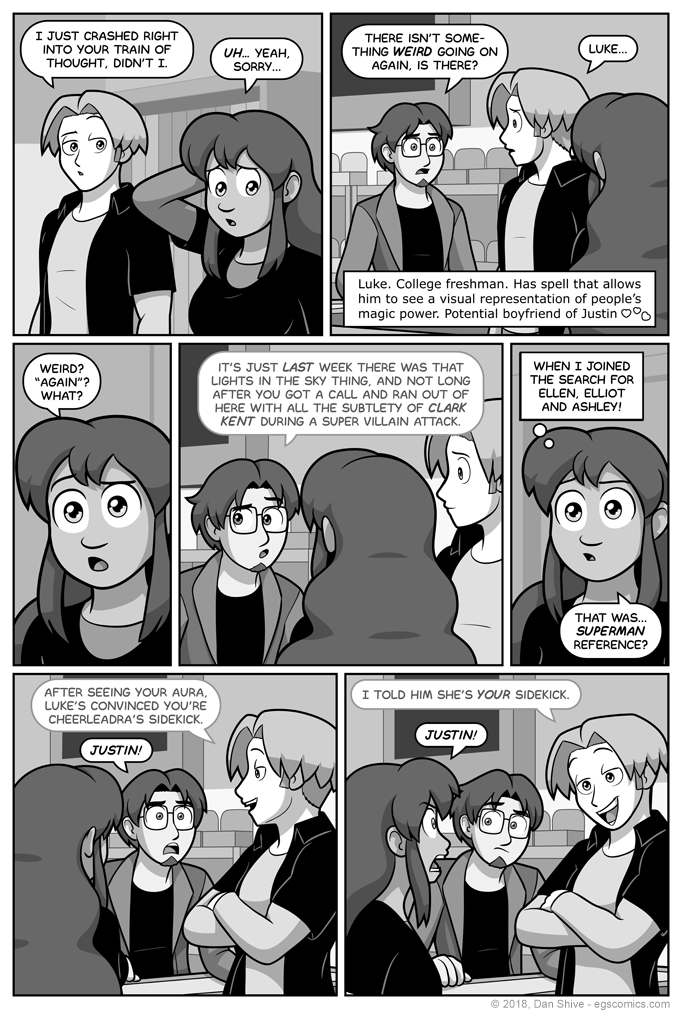 - Luke's first appearance and witnessing Grace's aura
- Justin talks to Luke about magic alone, but not before Grace's face of warning not to try anything
- Luke's "mission" to ask about Cheerleader

- The search for Ellen, Elliot, and Ashley

EDIT: This next part was written before I decided against giving Luke a soul patch

After a, ah, fair amount of feedback from when Luke was introduced, I tried giving an actual soul patch for facial hair (it's canonically been two weeks, plenty of time to change that up). This storyline also has Sam with similar facial hair AND glasses, so I figured now was as good a time to experiment.

It's a more realistic style for someone to have, but I don't know about it in my style.

Granted, I might just not be used to it. In any case, I'm sure I'll receive no feedback whatsoever on it.

EDIT: Initial feedback was not favorable, and from a personal standpoint, it sort of looked like a second mouth to me (the main issue of a soul patch in my style, in my opinion). Here's how Luke originally looked in this comic:

Not TERRIBLE, but not great, either.

Something about the way Elliot is three syllables ending in a "t" and Ellen is two ending in an "n" makes me find it more natural to say "Elliot and Ellen".

Grace, however, is closer to Ellen than Elliot, and the order that feels natural to her has less to do with sound, and more to do with a hierarchy of closeness.

Not that she doesn't like Elliot. They're definitely good friends. It's just Ellen's the one she's close enough to that many have mistaken them for a couple, and Grace has never fallen asleep while watching a movie with Elliot and later woken up to the sight of Tedd's face being completely red.