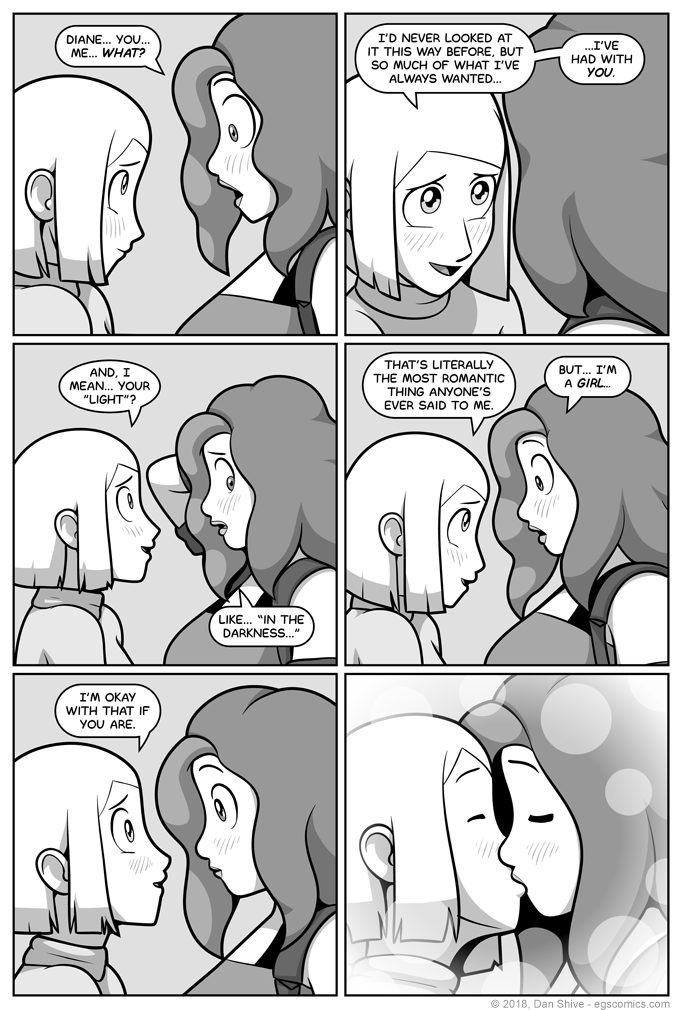 - Lack of Romance
- You wanted Romance

As I originally wrote in the script, that last kiss sounded like it was going to be way more intense. I prefer it this way, however, particularly given that we just had the more dramatic kiss, and I don't think it needs to be one upped in intensity. What we have here is a quieter, more tender kiss.

At this point, I feel I must formally apologize to all Street Fighter 2 fans for not putting "turbo" after the "2". My bad.

Yes it was. I foreshadowed Diane's potential attraction to women in a few ways (recall bowtie Elliot VS Sultry Nanase), and the point was made that Diane and Lucy were close and double-dated a lot, but this was sudden.

I felt it needed to be. What Diane had a couple comics back while her brain was seemingly frozen was an epiphany. I've had a few of them. I've even had a couple similar to Diane's here. They're neat.

If it wasn't sudden, if I foreshadowed too much or was too heavy handed with it... Well, one, it might make it NOT an epiphany, but mostly it would have lessened suspense and worsened pacing because that less sudden-making would have to go SOMEWHERE.

(Seriously, this storyline is already going to be about three weeks longer than anticipated before it's done).

Someday I might welcome criticism regarding this, but for now, too soon for me, and I need to keep moving forward and twirling towards freedom (Simpsons reference. Someone twirled towards freedom. It was great).