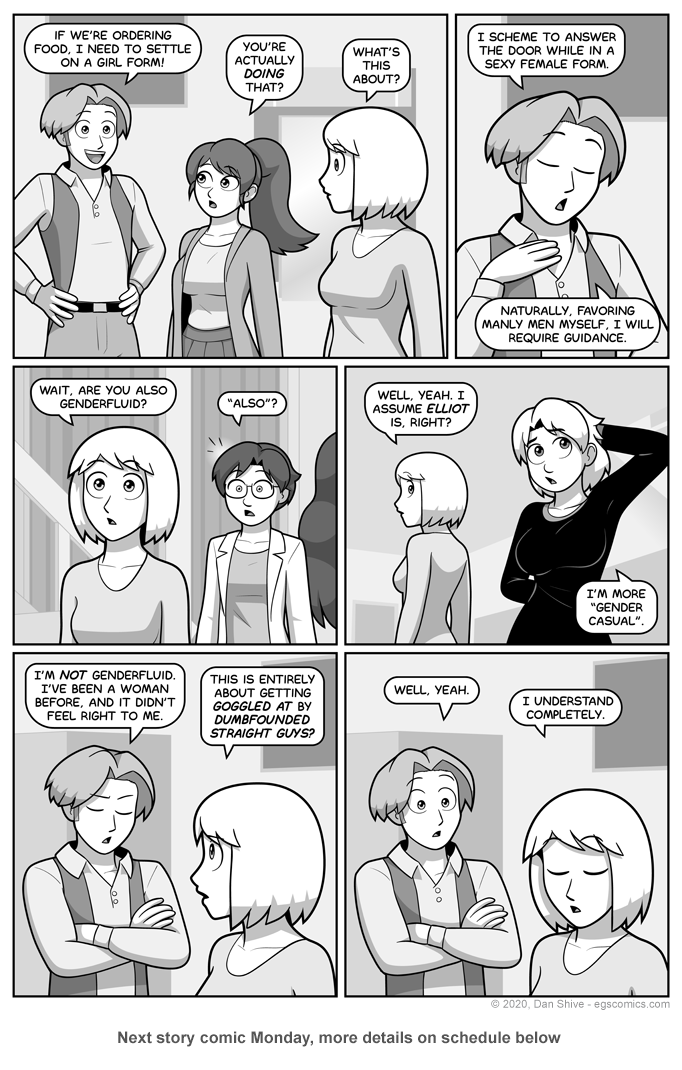 Schedule stuff - EGSNP is Tues-Thurs-Saturday for now. Thursday's will be "sometime Thursday" (will tweet), Saturday's should be on-time.

Story comics are still planned to be Mon-Weds-Friday, but after this Wednesday's story comic became a Thursday comic, I'm taking a mulligan and saying that starts next week, so the next story comic will be Monday.

There have been writer's block issues with both Story and EGSNP. In both, I was at a point of indecision about what precisely to do next. Then a whole BUNCH of stuff happened all at once (several separate personal things all at once, and a lot affecting all of us), and I had a great deal of difficulty concentrating at all on sorting things out.

I believe I have managed to do so now, however, which brings us to

The big issue I had in the story was, firstly, what order to do certain things in, and secondly, whether to have Justin actually follow through on previously proposed nonsense. Justin being a bit of a chaotic good troll, and the difference between joking about a thing like that and actually doing it, had me seriously considering how serious Justin was.

I can't actually elaborate on what ultimately made the answer "yes, he was serious" in full yet, but part of it was just that there's silliness to it, and I want silliness right now.

Speaking of deciding what order in which to do things, I actually managed to have Elliot bring up "gender casual" and not have everything derail and immediately become about that! It's actually a thing that gets mentioned without immediate elaboration and can be talked about later! YAY!

(I know that might not seem big, but I was THIS CLOSE to going immediately off the rails from Justin's hijinks only to try and immediately get back on that track, and I don't know if you've ever been on a train before, but they don't do that so well.)