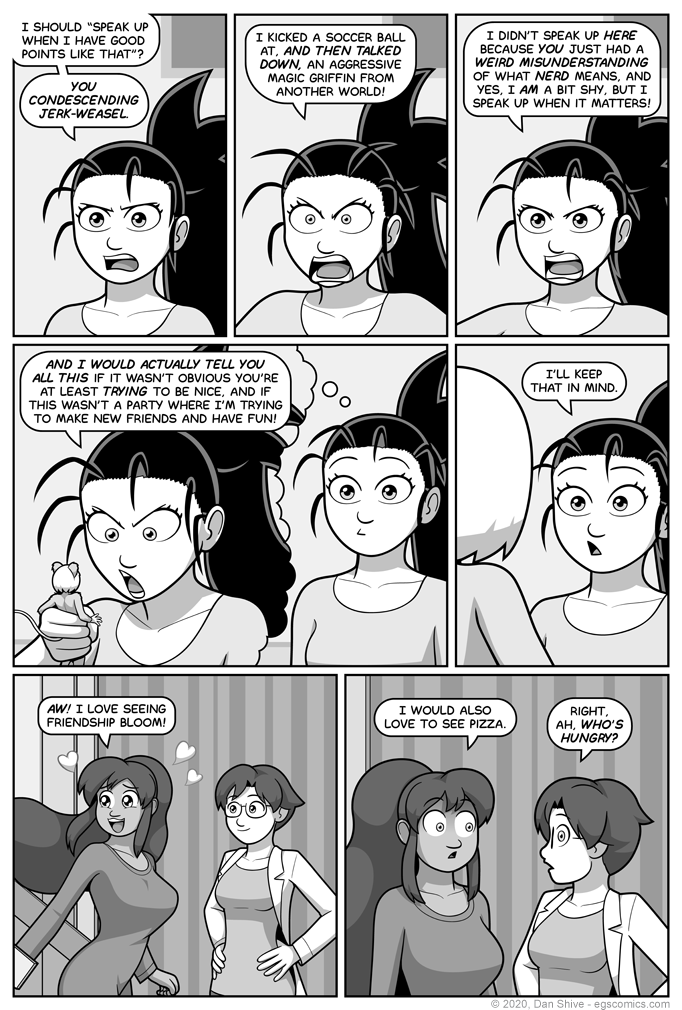 There's likely to be more comics "during the day" for a bit, and I will always announce new comics on Twitter. More than usual, I have decided it's a bad idea to not get enough sleep, and after last week's various speed bumps, I'm still playing catch up while also trying not to hurt myself.

EGSNP is going to be Tuesday, Thursday, and Saturday until further notice as a result of this. While I prefer Mon-Wed-Friday, I might be sticking with this change for a while, and I will announce if it changes again.

I'm still sorting out sketchbook times. All I'm certain of is that I'm prioritizing getting out of this "during the day" rut first.

In many ways, Ashley has a very shy personality, and I initially didn't consider having much of a response to Diane encouraging her to speak up.

The more I thought about it, however, Ashley is shy in body language and how she phrases things, but she is someone who ultimately acts, and she really puts herself out there.

This is the woman who approached Elliot to try and warn Susan about her ex-boyfriend, kicked a soccer ball at a gosh darn griffin, helped a complete stranger quit smoking, and fantasizes about things like turning the woman who just called her mousy into a tiny mouse-girl.

She might not actually SAY anything in this case, and she's going to be diplomatic in the end, but her response is NOT going to be "golly gee, maybe Diane's got a point".