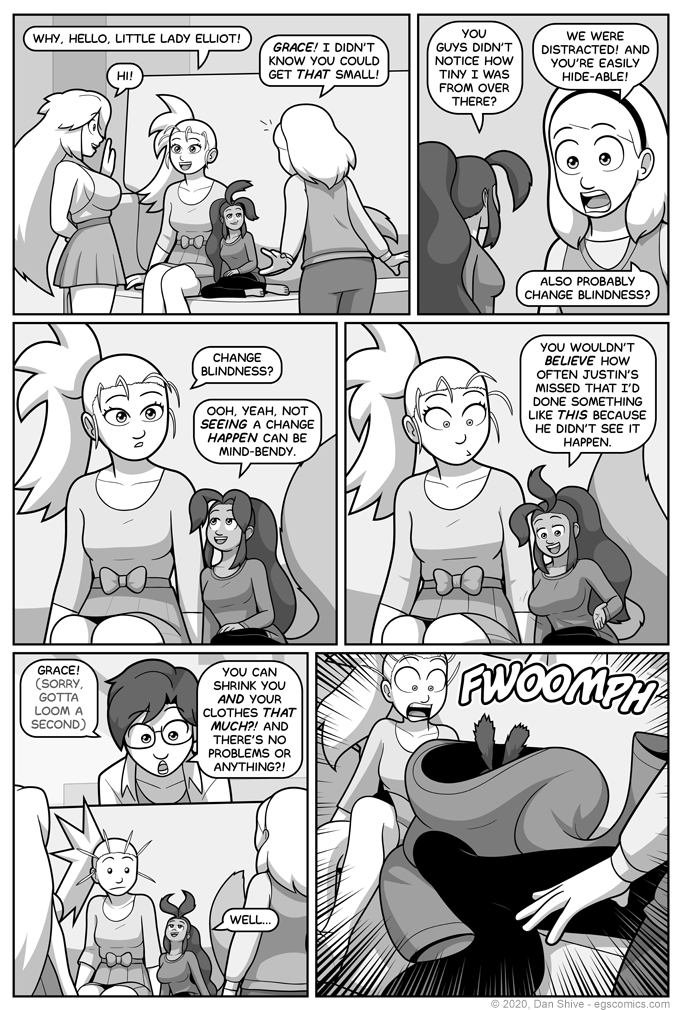 You might call panel four gratuitous. *I* call it an important detail that just happened to take the FORM of something gratuitous, so THERE!

As much as I don't like that I wound up taking this past Wednesday off from posting a comic, I must confess to a small pleasure in this being an honest-to-goodness Friday comic.

As for that day off, I was at least a couple hours away from finishing the comic at around three in the morning Wednesday when I realized "I feel like trash, I'm going to feel even worse if I stay up and finish this, my shoulder hurts, I don't even know what I'm going to do for Wednesday's EGSNP, this is all a terrible idea and I should slow things down."

So I did. I didn't like doing it at the time, but I'm so glad I did. The week before this one was hectic and distracting as all heck for me, and I didn't really get any time to stop and think about the next week of EGS, and it was showing.

One way it showed was that I originally planned to have Elliot and Sarah get on the sofa, with Sarah needing help to get on, and Elliot picking her up for a really impressive jump, and yes, I know what you're thinking, that sounds great, BUUUUUUUT...

They're not that small. Not nearly. My brain saw no issues with that idea until I sat down to make the thing, and it was just "oh. The couch is, at worst, a little high to them. Guess I have to re-write this now."

And THAT'S why time to rest is important, kids. And adults. And Timeless space beings. It's body AND mind.

All that said, many thanks to everyone for your patience and support. I encountered nothing but understanding in response to the delay, and I thank you.