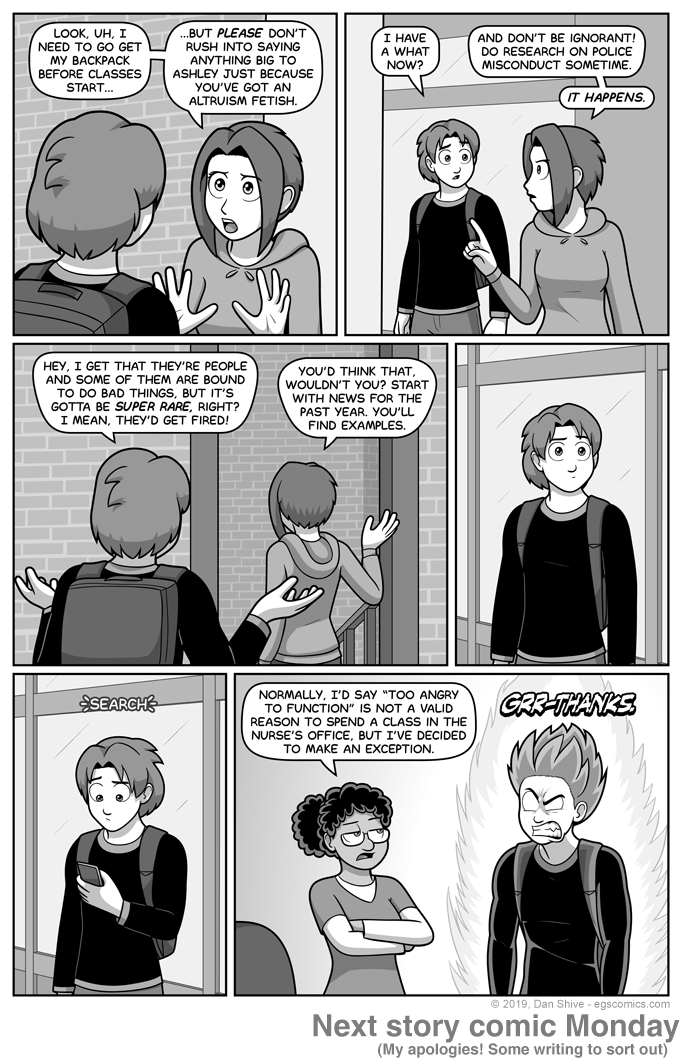 I've decided the next story comic needs to be Monday because I've got some sorting out to do for the next part of the storyline, and I'd be rushing it if it were Friday. I think it's for the best, but I am sorry for the delay.

And now, your regularly scheduled commentary

And that's after he logically only had time to skim through a few headlines and introductory sentences. Just wait until he gets into the real details and all the problems that exist within the system that enable bad behavior.

Confession: It would genuinely be more in character for Liz to say something that rhymes with "altruism loner" in panel one, but I felt that didn't fit the tone of EGS in general. All the same, it's something Liz would say.

When I decided to have Elliot note that Tedd's dad was in "law enforcement", however, people wondered if Liz would actually be comforted by that. I suddenly realized I had an opportunity to get this into the story much earlier, and with much less fuss.

(This will seem strange until a future commentary)"

On a more serious note

There are a few reasons why this topic was chosen to angry up Elliot's blood, and one is that Elliot and I have a shared trait: We both have huge respect for people who put their lives on the line to protect others while doing their best to live up to the ideals of those positions. Police officers, fire fighters, soldiers... Just the willingness to do that, and to protect and serve others. That's amazing.

One area Elliot and I differ in is that I'm not sure I could do any of those jobs well, even with training. There are aspects I could do, sure, but there's a higher standard with those jobs, and there are areas in which I don't think I would do well.

Which is part of the point. Huge respect, but held to high standards, as anyone with power should be. Beyond basic competence, the idea of someone abusing such power infuriates me. It hurts everyone in society, and leaves us in a situation in which people need to be instructed on how to safely communicate with police, and to know our rights so as to be protected from them.

It's the sort of problem that frustrates and angers both me and Elliot.

(Granted, I don't know any other main characters who wouldn't be frustrated and angry about such misconduct, but Elliot especially doesn't take it well.)

While making this comic, I kept this all close to mind by having a playlist of Last Week Tonight on with topics specific to law enforcement. If you don't know where I'm coming from with all this and don't mind John Oliver saying naughty words, it's one way to get the picture.