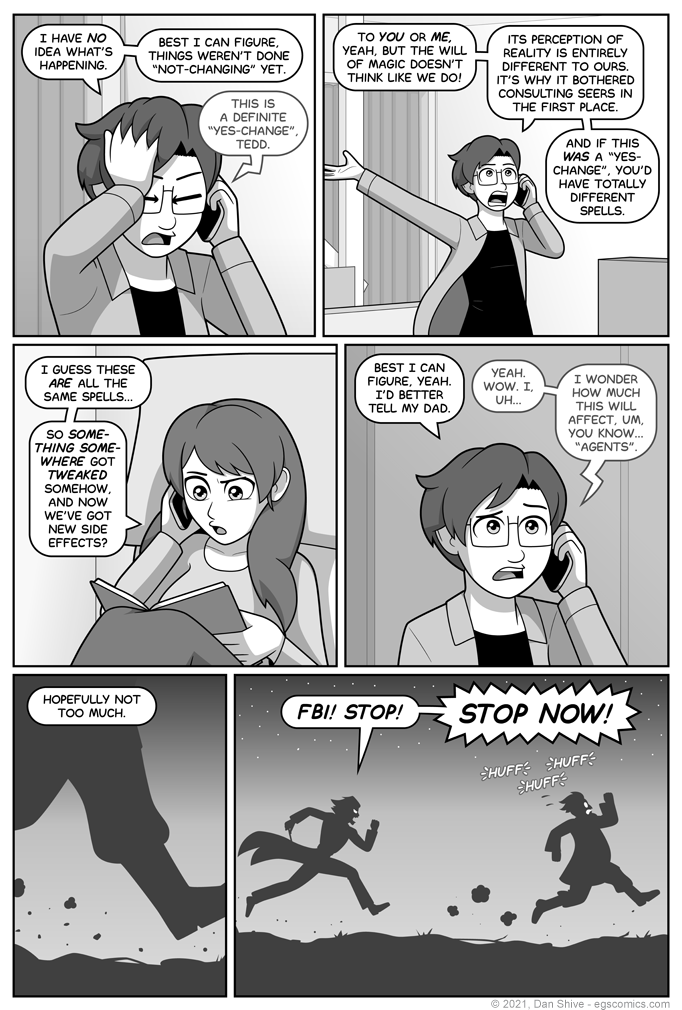 As the first panel implies, this is not something they simply missed happening over the past few weeks. Whatever this is, it's new.

The previous page was originally less clear on this, with text in the first panel saying "...if anyone regularly checked their spell books." This didn't specify how regularly, giving some the impression that people hadn't checked them in weeks, and had somehow just missed these changes in all that time.

I have since changed that text to "...if anyone checked their spell books on a daily basis," much more clearly implying how recently the change had occurred.

How long was this planned?

I get annoyed by authors making claims about how long they've had things planned that aren't true. This is in part because I'm just generally annoyed by people making false ego-driven claims, which is generally what those claims amount to.

Another is because it quite fairly makes readers more suspicious of such claims when so many are clearly false.

With that in mind, no, I did not have these specific complications planned in 2018. I had considered various ways powers might get nerfed and/or changed, but very little in mind that I actually wanted to implement (Grace's clothes changing with her being an example of something I did want).

So when it was the latter-half of Ashley's party and I thought of a bunch of fun things that could happen with people's spells, and then of how it could be (in my opinion) great for the ongoing story in general, I didn't have a plan in place for how it would all make sense.

Tedd on this page sounds similar to me when I first had the idea, tossing around ideas for how I could make additional changes without being inconsistent and illogical.

That said, I'm totally going to find ways to make fun of it not being part of the plan back then, because that's how I roll.