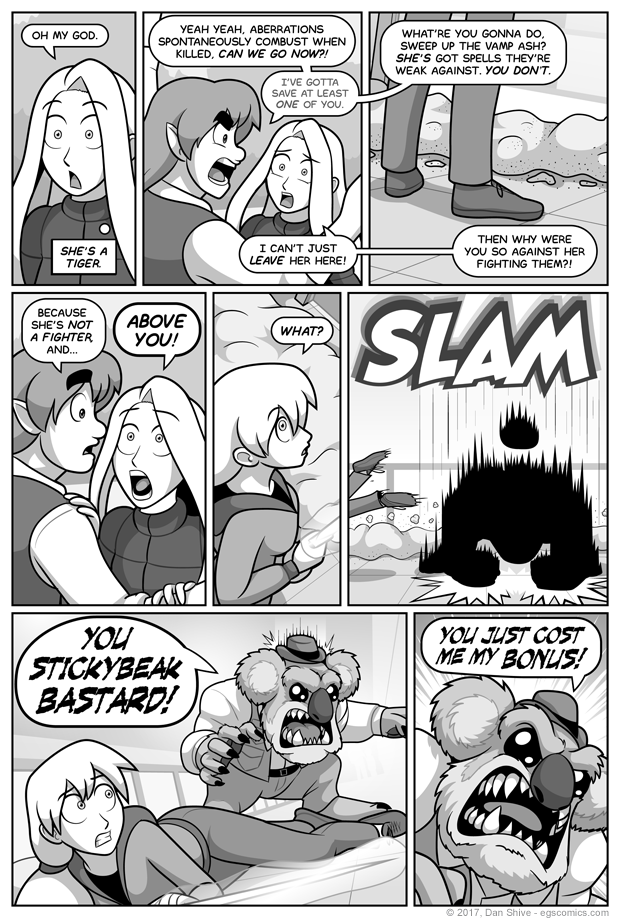 "Stickybeak" supposedly means a nosy and/or interfering person in Australian slang. For all I know, not being Australian, it hasn't been said by anyone in Australia since 6,000 BC, or possibly never at all. Should that be the case, Australia, please adopt it as common usage so that I look less foolish.

I wasn’t planning to bring the lions, tigers and bears (oh my) thing full circle (Wizard of Oz reference). I wasn’t even trying to make it a thing. I just had Diane compare Susan to a bear once, then later a lion, and it was only after someone pointed it out to me that I realized what I'd started, and what I had to finish.

- Bonuses (two possible, one now lost due to aberration death)

Yeah, that's right. The Kangaroo Aberration turns into a koala. A koala that attacks from above.

I teased on Twitter that "An Australian animal form will be in the comic soon. No, not that one.".

I don't know if the people guessing "koalas" and "drop bears" were serious, but it rains cookies today for them. I wasn't thinking of the joke about koala bears being "drop bears" that attack people by dropping down from trees when I decided this guy would attack from above, but hey, bonus.