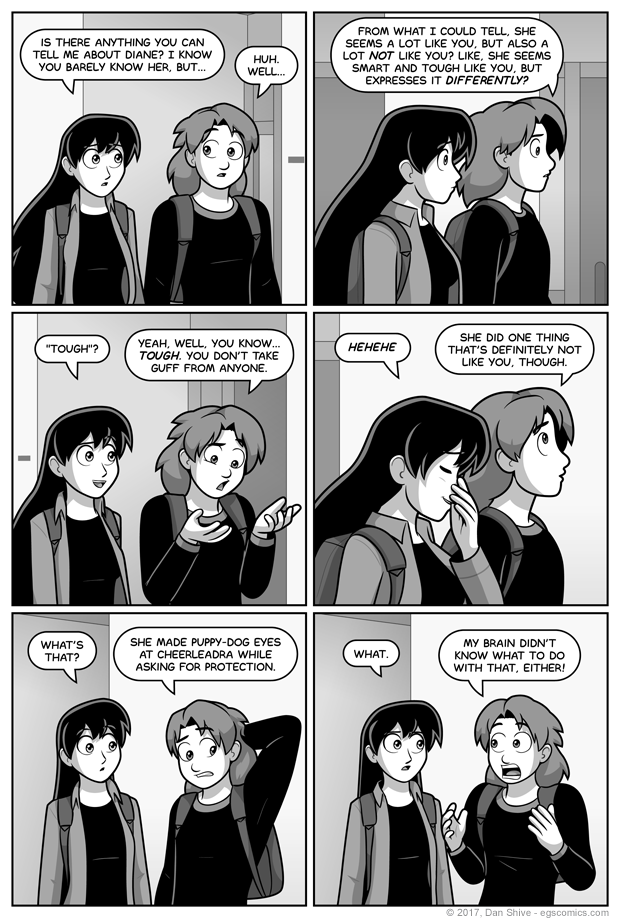 - "You don't mind keeping me safe, do you?"
- Elliot's unhelpful brain (very next page)
- Elliot with Diane (and others) in a parking lot

Would I describe Susan's laughter in panel four as giggling?

No, and neither should you. She might be listening.

I like that Elliot is just a little taller than Susan these days. They're close enough to look equal in height depending on their individual postures. Susan would tower over him if she wore high heels!

Granted, that's highly unlikely to ever happen. Just saying she would. Maybe don't mention this to Susan, either.

Elliot hasn't had much interaction with Diane, but he has seen her backtalk Tara the tiger griffin and Nanase. Granted, Diane postitioned herself behind Nanase while backtalking Tara, but still.

By the way, I promise there aren't going to be a billion pages of Diane and Susan asking about each other. First of all, a billion? That's absurd. How dare you.

Secondly, focus has been elsewhere for most of the arc, but this is Susan and Diane finally meeting each other. I feel some of their day leading up to their meeting is warranted. And I may or may not be setting up other things but that's not important moving on!

Thirdly, literally the only other person at MNHS Susan knows she could ask about Diane is Ashley, and her experience overlaps with Elliot's, so... Yeah. Susan's already exhausted her pool of available Diane "experts" at MNHS, and she's already talked to Nanase, Ellen, and Justin. That well is dry.