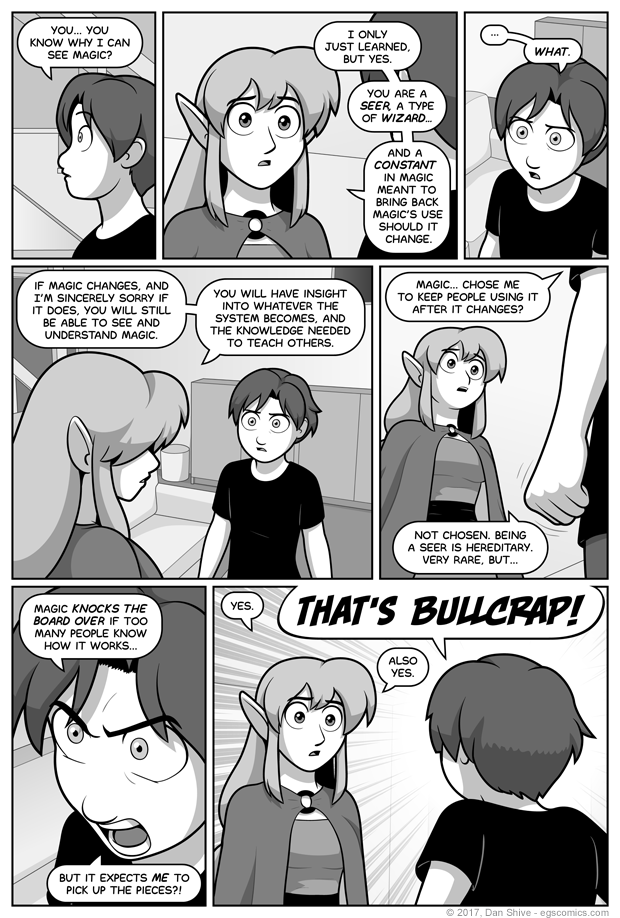 Arguably, this is fantastic news for Tedd and his long term goals, but nobody likes being jerked around.

Well, okay. There's pretty much always going to be an exception. Someone might like it. Not Tedd, though.

Tedd was originally going to curse more severely, referencing instead a horse with an arguably more profane word to follow it. Ultimately, it was not a compulsion to keep the cursing under control that toned it down, but how well the text fit into the panel when shouted by Tedd.

Admittedly, it might have fit nearly as nicely if I had used letters instead of symbols for the latter half of the curse, but that could be considered a considerable shift in the comic's overall tone and content, and I'm not eager to do that.

Wizards in EGS are defined as people who have the ability to learn, and use, other people's spells. Tedd, however, is specifically not supposed to be able to get spells of his own (outside of cheating via magic mark), which would mean not being able to learn and use other people's spells, either. How exactly, then, is an EGS seer also an EGS wizard?

Whatever the answer, I assure you that we will discover it sometime between two days and two years from now.