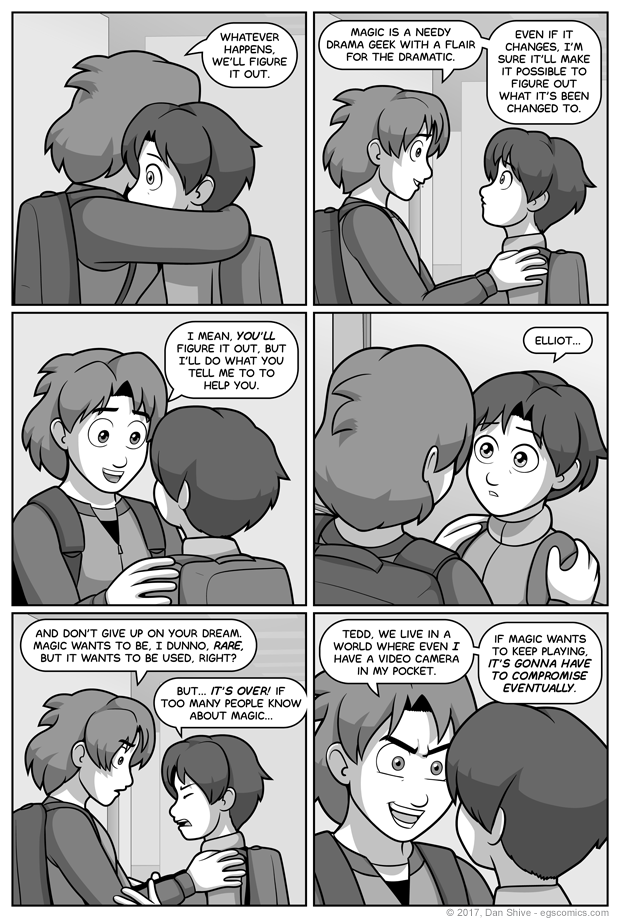 For future historians, this comic wound up being a Monday instead of a Friday due to me coming down with a rather bad cold the middle of last week. Friday's EGS:NP was spared "cartoonist cough-ageddon" due to having been done in advance, but this, sadly, was delayed so I could rest. I'm not at what I would charitably describe as "100%" yet, but I'm close enough to get back to work with only occasional coughing annoying me.

With that out of the way, the actual comic commentary! Which is as follows: I can't say anything without leading the audience. THE END!

Actually, no, there's one thing I can address, and that's that Elliot and Tedd are used to discussing magic as though it has some sort of will to it, which is the basis by which Elliot's saying magic wants to be used. I bring this up because, in the context of Sister 3, magic wanting to be used has been said a lot, but nobody's said it to Elliot.

It's not something Elliot needs to be told at this point, but part of me wishes Tedd had noted that in his ranting earlier (this part of me has no respect for pacing, panel space, the fact that Tedd knows Elliot wouldn't need to be told this, that it wasn't directly relevant to what Tedd was saying, or the idea that relatively minor details that won't bother most people can be addressed in commentaries).