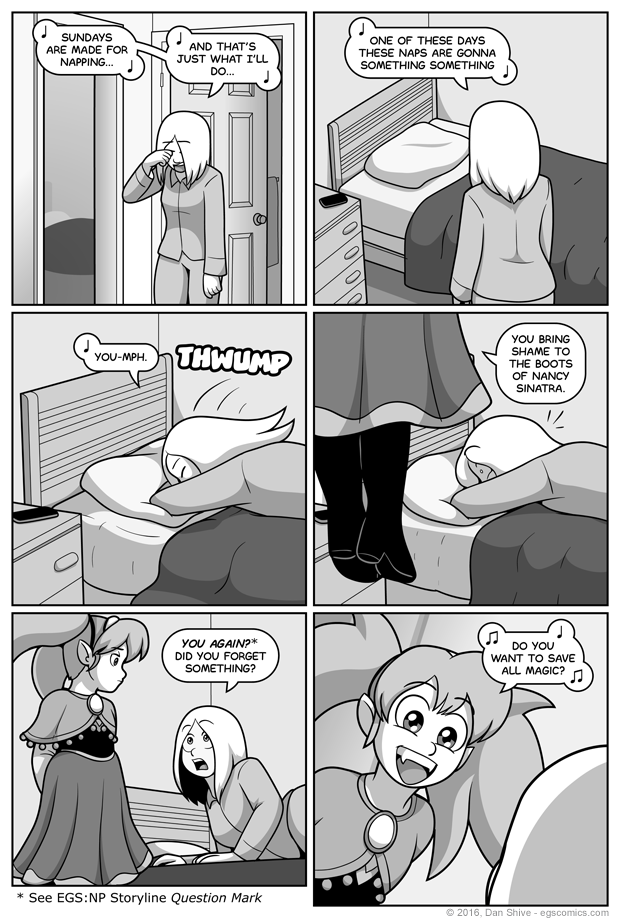 Firstly, thus ends part 2! Yes, this isn't just a Friday cliffhanger. This is a "we'll find out where this conversation went after we take a break from Pandora for a bit in the next part" cliffhanger. FUN!

(Though I will say it is possible to guess what Pandora wants Sarah to do. It requires at least one assumption, but it's possible)

Secondly, sorry about the delay. I want to minimize redundancy of recapping and exposition in this story arc as much as possible, and I've re-ordered a few things to accomplish just that. Nothing's really changed but the order in which some things will be shown, and nothing cut but redundancy. So... Huzzah for that, I suppose!

Speaking of redundancy, I *am* going to have to recap a bit more than I'd like of Question Mark, though not right away. In retrospect, putting something of that significance in the EGS:NP section was probably not my brightest idea, and will make things a bit more awkward the first time reading through the archives (which other people predicted, but that was after I'd already got the Question Mark storyline  ball rolling, and I was eager to get to it).

I'm considering sneaking a consolidated version of it into the archives to deal with that, but for now, awkward footnote saying "this EGS:NP storyline matters you should probably read it" it is. I say "considering", but I'm pretty certain I'm going to do something like that. Easier said than done with EGS:NP comics being too wide for the story section, but by no means impossible.