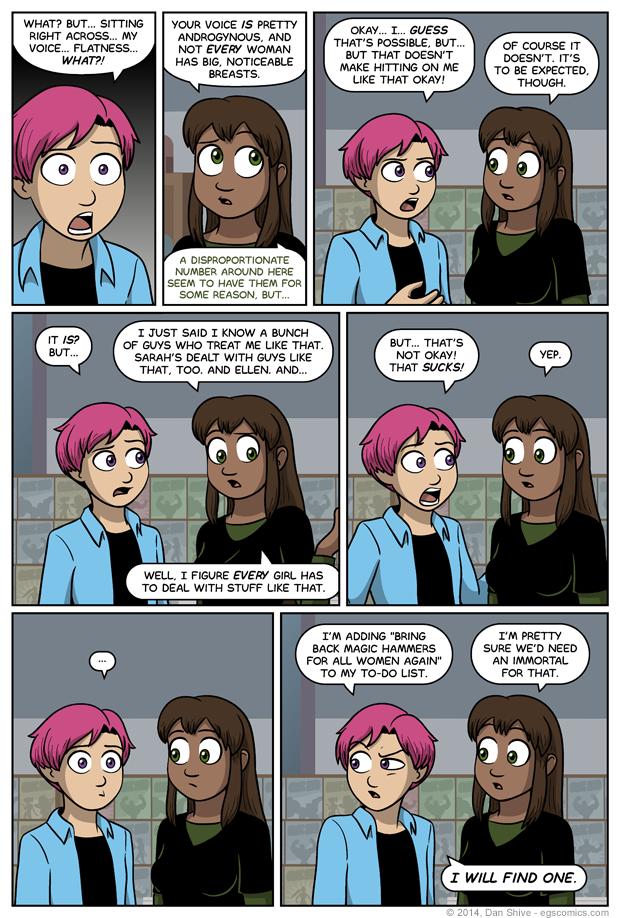 - I'm linking to Hammerchlorians again and you can't stop me
- And again, this time linking to the immortal who made the hammers possible
- Annnnd just making note of the fact that Susan can still summon hammers

Silly Tedd! There couldn't possibly be any immortals nearby!

For the record, panel two is a self conscious commentary on my own artwork and NOT foreshadowing. Granted, "magic did it" would be a convenient excuse, and sorta fit with canon... BUT NO.

Technically, that's not exactly what she said (in reference to panel four), but it was certainly implied.

One response to the previous comic was the hope that Tedd wouldn't be learning a "this is the sort of thing women have to put up with" lesson on account of Tedd not treating women like Larry was. While it's true that Tedd has said many rude things in the past, he has been a lot better about it lately (months of better behavior from their perspective), and he's never hit on women in that fashion.

That said, pointing at Tedd and saying "look at what you've personally been doing, now stop it" isn't really the point. I'm not going to say exactly what the point is, as I don't want to speak for the comic, but not that. I suppose eliminating that as a possible point is sort of speaking for the comic... Oh no. I'VE SAID TOO MUCH.

*Throws a smoke bomb at the ground, then flees while shouting something about demonic ducks.*