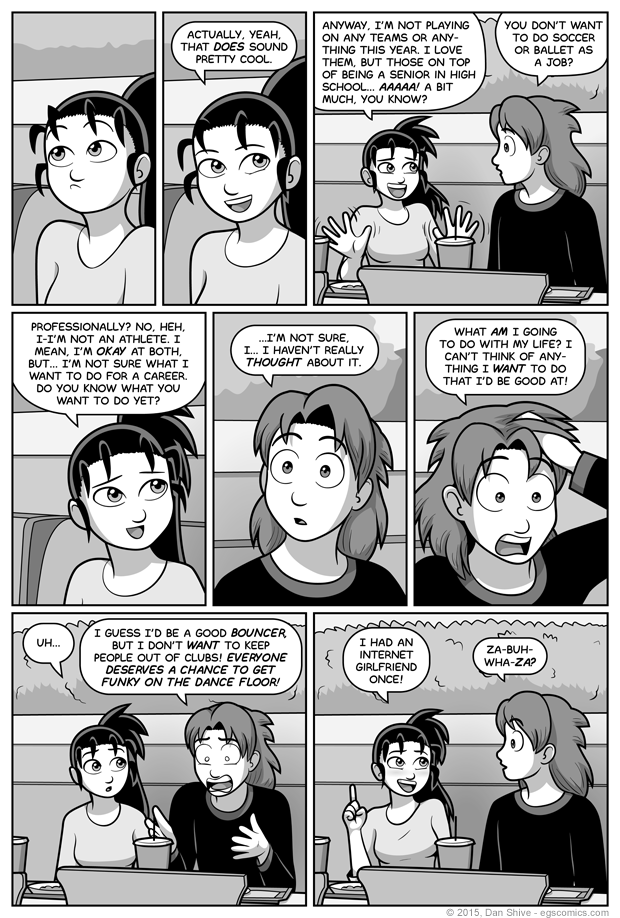 Wow, Ashley. Are you a goalie? Because that was a NICE SAVE

Elliot in this comic is a general picture of me in my senior year of high school. I didn't think I was good enough at the things I really wanted to do to pursue them, and I was increasingly frustrated with school because I didn't think they were teaching me much of anything that was going to help.

In some ways, I wasn't being entirely fair, but in others, I totally had legitimate complaints. I probably would have majored in graphic design right off the bat if the graphic design courses offered at my school weren't such a travesty.

I've probably mentioned elsewhere how, at a well funded school with all sorts of murals and others fancy things, I was in graphic design courses with out-dated, busted equipment, and no actual graphic design teacher. We started with someone who wasn't particularly good at teaching, and when he left suddenly for health reasons, we got a permanent substitue who had no training in graphic design. It basically wound up being a study hall in which I was taught nothing.

Wow. Um... I didn't expect to go on about that, but once I was reminded of it, the momentum built up fast. In any case, Elliot's situation is a little different. He's mostly just an average student who's not big on introspection and doesn't usually think all that far ahead.