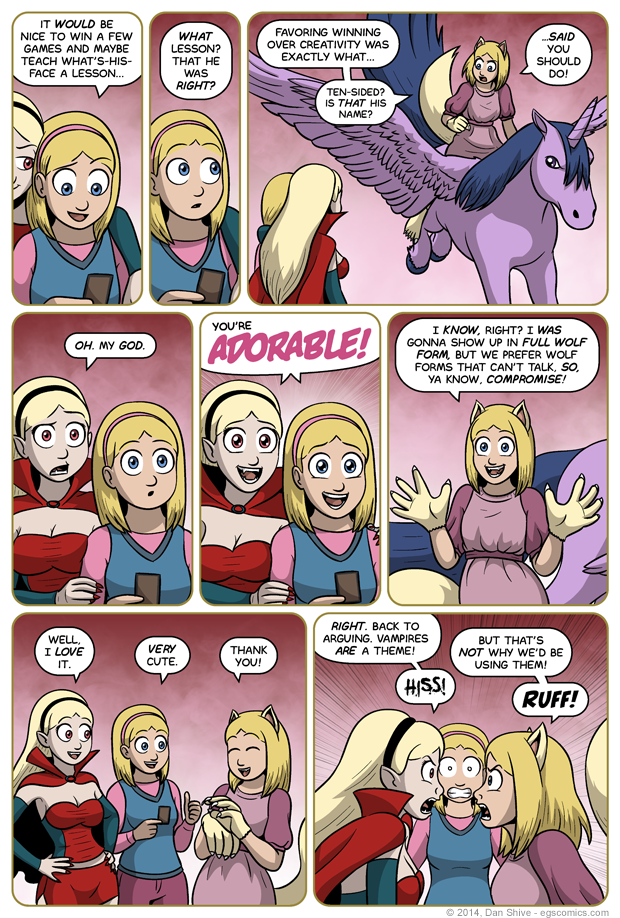 Why yes, those are the same reference links as for the previous comic's commentary. It happens sometimes!

I wasn't entirely certain how I was going to represent the part of Sarah who would oppose the part of her that wants to build a vampire deck, but I did know I didn't want to go with the huge strong werewolf. Aside from being difficult to stage, it did seem weird for such a form to talk.

As opposed to everything else that's happening, which is all perfectly normal.

An interesting alternative to this solution (at least in my opinion) I considered was having Werewolf Sarah show up in peasant form followed by Vampire Sarah complaining about that being boring, and Werewolf Sarah not wanting to transform just then because Sarah was currently thinking of werewolves as weak, meaning she'd wind up being a smaller, weaker werewolf.

I like that idea on account of the whole "Sarah's mindset is affecting the visuals" angle, but it seemed even more complicated, and if she did turn into a werewolf, that whole "can't speak" thing would be an issue. One could argue I wouldn't have to stick with that, but I the whole reason I liked the idea was it being a reflection of Sarah's mind and she thinks a big werewolf mouth should interfere with speech, so I'd have to keep both to be happy.

In short, I ultimately prefer Kawaii (cute) Werewolf Sarah for this scene.

The pegasus unicorn's design, incidentally, is also more kawaii than it was before. The perspective is less extreme in this comic, making it more difficult to tell, but I assure you, mild increases to kawaii-ness have occurred in order to to accommodate the change to her rider.