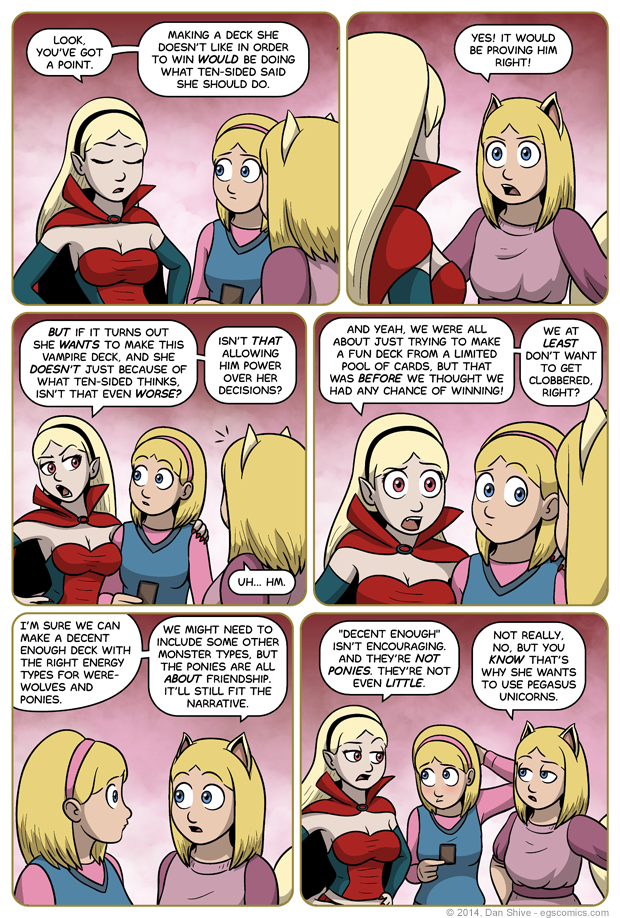 I'm sure I have no idea what manner of ponies that are little they are referring to in that last panel.

For any hypothetical person who's tired of seeing this representation of Sarah's mind, don't fret! There are only five hundred more comics of it to go!*

Werewolf Sarah's hands aren't visible in this ocmic, but after the previous comic, a few people were asking if she was wearing gloves. This has thus far been my official response:

Sure. Let's call them "gloves".

Which basically says it all, really. I meant for the ears, tail, and furry hands and feet to be more transformed state than costume. I wouldn't really call it a reference to anything, but the big hands and feet are definitely inspired by a variety of cat girl designs out there with big paws for hands. Granted, she's supposed to be more wolfy than kitty, BUT WHATEVER.

While we're on the subject, Vampire Sarah is generically referencing a certain variety of vampires and isn't referencing anything specific beyond that. Many have asked if I was referencing a specific episode of Buffy the Vampire Slayer, but I haven't seen the episode in question. I must actually confess to not seeing seeing many episodes of the show.

I did shake Joss Whedon's hand once, though. That's sort of the same as watching every episode of the show, right?