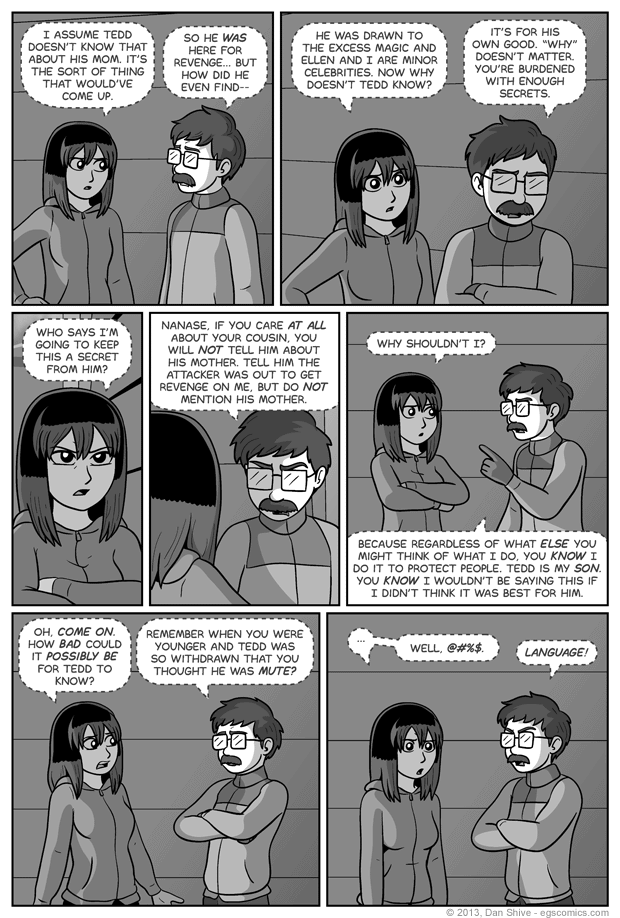 - Quiet Tedd
- She certainly is burdened with a few

I like it when Nanase glares. It's when the family resmeblance between her and her mother is most apparent.

Annnnd this is one of those comics where everything I can think of to say is so close to crossing the line of spoiler that I'm not sure what to say... Which I suppose makes this the perfect commentary to start talking about the evolution of this storyline.

I mentioned in an earlier comic commentary that people were speculating as to whether Ellen was somehow responsible for people transforming and that I found it interesting and would elaborate why in a later commentary. Well, I suppose THAT TIME HAS COME.

The whole New Year's Eve party storyline began as a very vague idea to try and have a mystery plot with suspects and actual (well, TV show style) detective work. In it, Ellen would have been suspected of transforming someone, primarily because she was the only person present with the known ability to do so.

I still like that basic premise, and a variation of it could still happen someday. There were, however, a ridiculous number of problems with it. For one thing, the case against Ellen was paper thin. For another, there wasn't really a point to the story other than "hey, wouldn't it be neat if Ellen was a suspect in a mystery?" And yeah, I think that would be neat. It might still happen someday, but there needs to be more to it than that.

In spite of the huge amount of changes, however, the original idea resulted in a lot of elements and characters in this storyline. Charlotte, Rick, and Elijah, for example, were originally thought of for that unused storyline and have characteristics held over from it. I'll elaborate further in future comic commentaries.