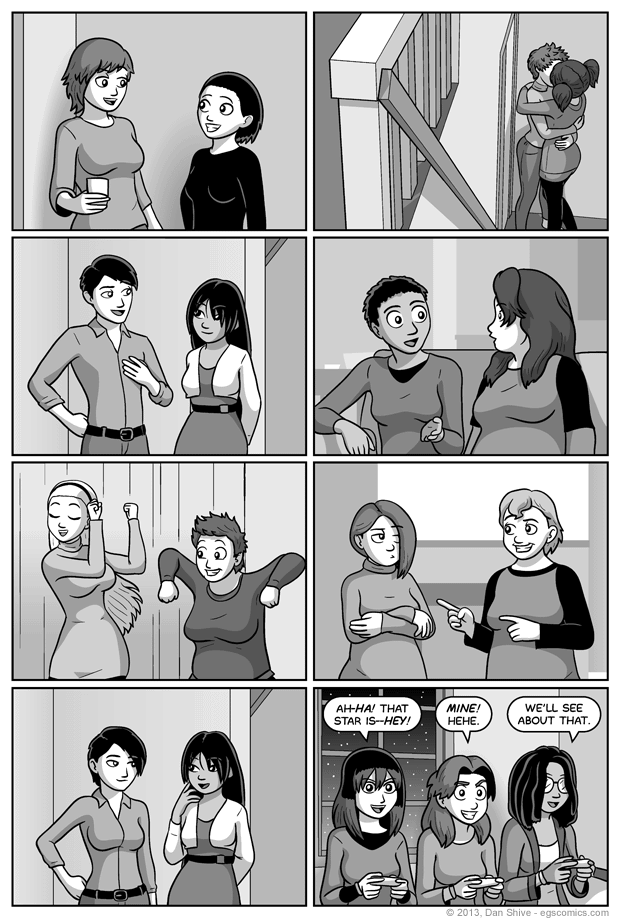 If you weren't paying attention to the two people talking in the background of yesterday's comic, you might want to take a second look. I'll wait.

YEAH. That happened. Of course, plenty of readers noticed (particularly given that I hinted in the commentary that there was something worth noting), but I deliberately made it so it was easy to miss.

What I find really interesting is that several of the people who did notice asked if Ellen was somehow to blame. I'll elaborate on why I find that so interesting later, but for now, I don't think it's a spoiler to say that if she *is* somehow responsible for the party quickly becoming a girls-only deal, she's not doing it on purpose.

I mean, really. A - She wouldn't do that to anyone not named "Tedd", and B - She's too busy partying it up Mario Party style (AKA "Best Party").

There's also the question of why nobody has noticed it happening. At least, I don't think they've noticed. If they have, then these are the most mellow people on Earth.

I was very tempted to devote an entire story comic with overly-dramatic dialogue to those two coming to the realization that they liked kissing a lot more than they thought they would, and concluding in a way that strongly hinted that there was something genuine between them.

As much as I liked the idea, this one panel pretty much implies that twist in, well, one panel. The moments and dialogue leading up to it might still wind up a sketchbook or something someday.