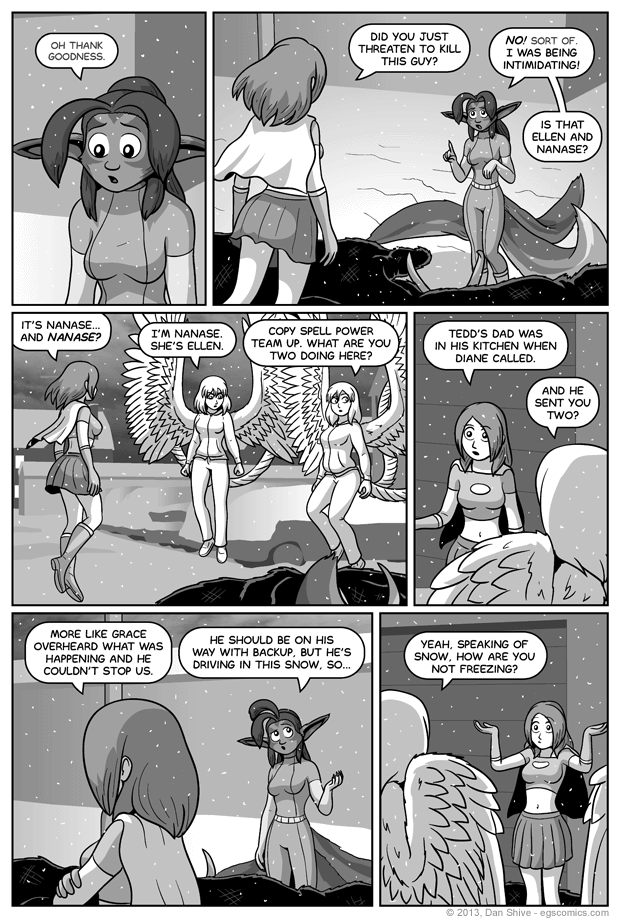 Just in case anyone was worried, this comic confirms it: Grace is still Grace.

The fact that the cold doesn't bother Cheerleadra is inspired by various comic book super heroes who are apparently immune to cold weather. The example that springs to mind is an episode of The Justice League where, assuming I'm remembering correctly, nobody bothered with arctic gear while at either the north or south pole. I forget which one. Presumably the one that doesn't have penguins, because I made a penguin joke about it once and people told me I was dumb.

In any case, I guess Batman has CRAZY good thermal underwear. And Wonder Woman, um... She's an amazon? Yeah, that's the ticket.

Speaking of Wonder Woman, AKA Diana of Themyscira (thanks, Wikipedia!) I was tempted to have Elliot refer to "Diana" as a bit of a joke regarding the fact that he's unfamiliar with Diane and would easily mess up her name. Much like an earlier Jerry = Santa joke from earlier that I decided not to do, however, I think it would have mostly just confused people.

I was originally going to have Nanase express obvious surprise over the idea of Mr. Verres sending Elliot and Grace, but no matter how I wrote it, it sounded like she was insulting them. That wouldn't have been the case, obviously. She knows they're capable. It's just that Mr. Verres would never send his son's best friend and girlfriend into danger. He's just not going to do that.