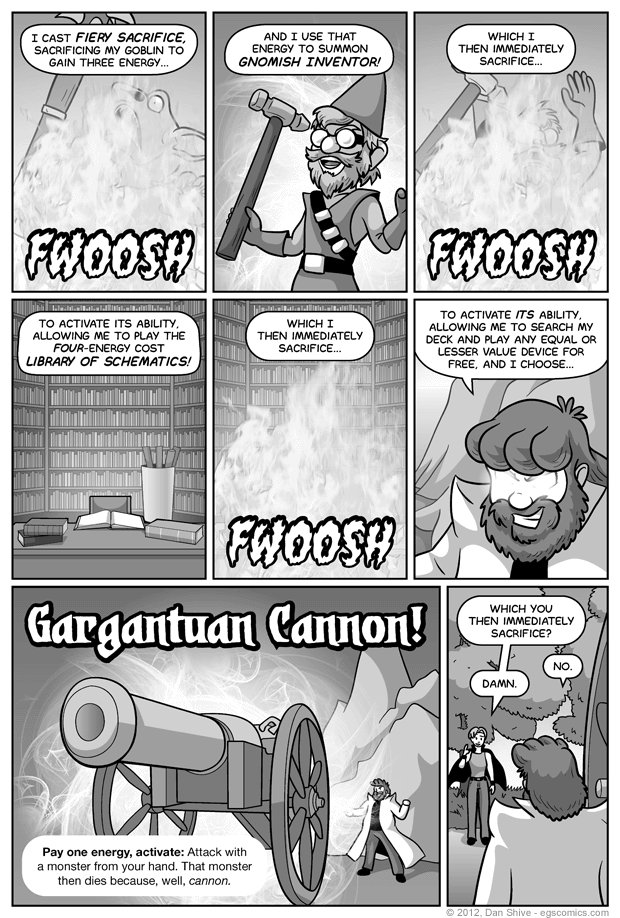 Posted September 11, 2012 at 1:00 am
With apologies to fans of both libraries and gnomes. I would apologize to fans of goblins, but they have GOT to be used to this sort of thing by now.

Alright! Now that the goblin's gone up in flames, I can FINALLY talk about this.

A comment I've received frequently from Magic enthusiasts is that the real-world equivalent of Tensaided's goblin would be overpowered. Based on the information I've provided, this is entirely true. A 2/1 creature for one energy that can attack the same turn it's summoned with no drawbacks would make players wonder if the design team had lost their minds.

Mentioning a drawback that doesn't impact the story at all, however, mostly just screws with the pacing and makes things more complicated than it needs to be (which I'll often do anyway, but quiet, you). Were card games like this the norm for this comic, I'd want to include such details regardless for world building and continuity, but that's not the case here.

Also, so long as we're discussing over-powered cards, this cannon is pretty ridiculous on account of being, well, a cannon. The ability itself is fine as a red-specific card (and it is inspired by an actual Magic card from 1998), but as a colorless card that any color deck could feasibly include? That's nuts.

Nonetheless, I wanted something tangible for this, and not some enchantment with an abstract feel to it. If it really bugs any card players, just pretend it's an artifact that requires red mana regardless.