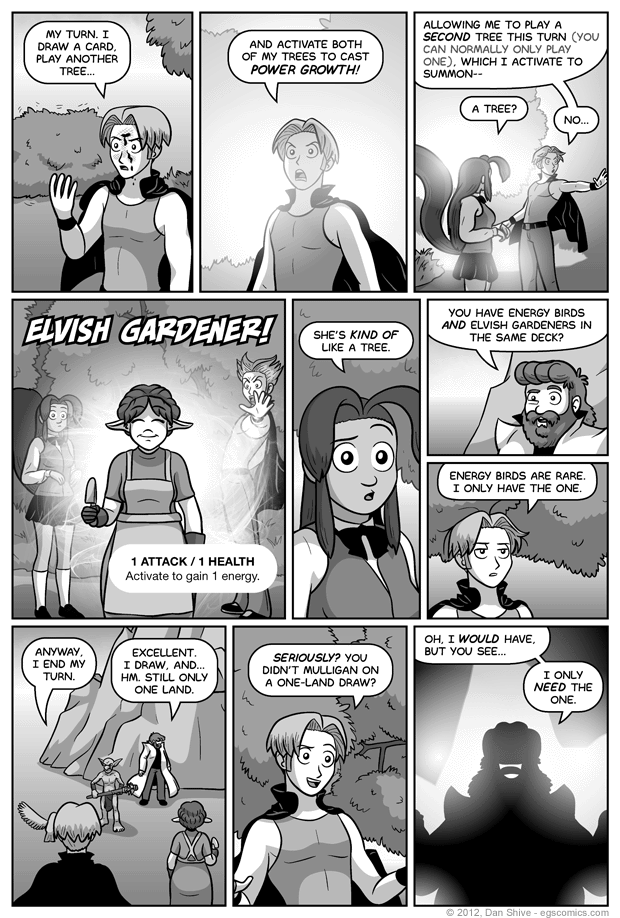 Posted September 10, 2012 at 1:00 am
This isn't really a My Little Pony reference, but it makes me think of it nonetheless. One character from the show, Fluttershy, once said that she'd "like to be a tree." I guess if she were a card in this game, she'd have an ability like this! Except Fluttershy is a pegasus, and flying is an off-ability for Green... Maybe she'd be multicolored? She's already yellow. That's kind of goldish...

It's possible I'm putting too much thought into this.

The land of Mulligans

"Mulligan" in this context would refer to opting to abandon one's initial hand, re-shuffling the deck, and drawing a hand one card smaller than normal (cumulatively winding up with a smaller and smaller hand if one mulligans more than once).

The reason for this option in the real Magic: The Gathering is the same as in this parody: Without land, you can't cast stuff. Alternatively, with too much land, you might be all powered up with nothing to cast. When building a deck, one must balance the probability of drawing land with the cost of the cards in their deck, which I find way too much fun to calculate for some reason.

Granted, getting actual math involved is generally overkill given various rules of thumb, but I like recreational math. This annoys the heck out of me, because I wasn't a good math student in school, and I've since concluded that I would have done much better if they had just given me some way to actually apply what they were teaching to something real.