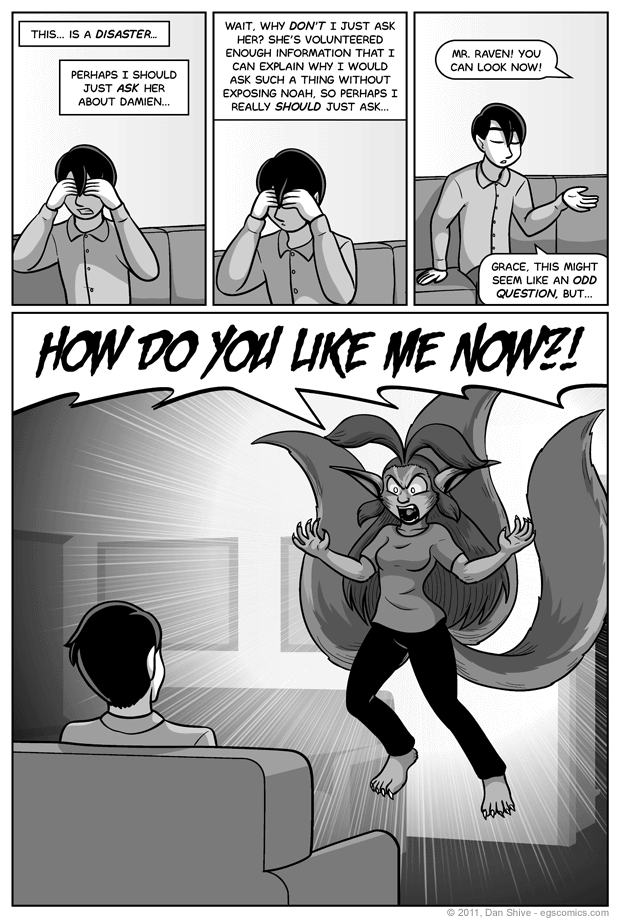 Well, there's at least one reason why Raven's been sticking to indirect questions. Even if he wasn't keeping his source a secret, that is something of an odd question to ask something. I mean, I'm sort of used to it, because I ask everyone I ever meet if they've ever killed a vampire, but I'm sure it would be awkward for most people.

What? That's useful information. Not that killing vampires is hard. I think I saw someone take one out with a pencil to the heart once. What are their ribcages made out of, cardboard?

Actually, let's stay on vampires, as I can't think of much else to say about the comic. I know it can't just be me who's noticed this (because it's never just me or you or whoever), but some vampires in fiction just seem like the most fragile things ever.

When Buffy just sort of stabs a vampire with a stake with her otherwise bare hands and they die, that's one thing, but I seem to recall it feeling like any given character could limp-wristedly poke a vampire in the chest and the vampire would burst into ash. Shouldn't they need a mallet or something to drive in the stake? I didn't make up that pencil example, either. I'm pretty sure I saw that on a TV show somewhere. Or maybe that was real...?

In any case, this is something I'd actually like the Mythbusters to take on. Not vampires (obviously), but just how easy one would be to stake if, in theory, they had at least human levels of ribtacularness and chest muscleosity. Yes, those are words now. I have invented them.

ANYWAY, the basic tests I would like to see would be staking without a mallet (both on standing and lying down targets) and alternative stabby measures. That is a thing they could actually do with human analogues, so again, don't fling any "but they're vampires so there's nothing to test" logic my way. This is a logic-free zone, baby!