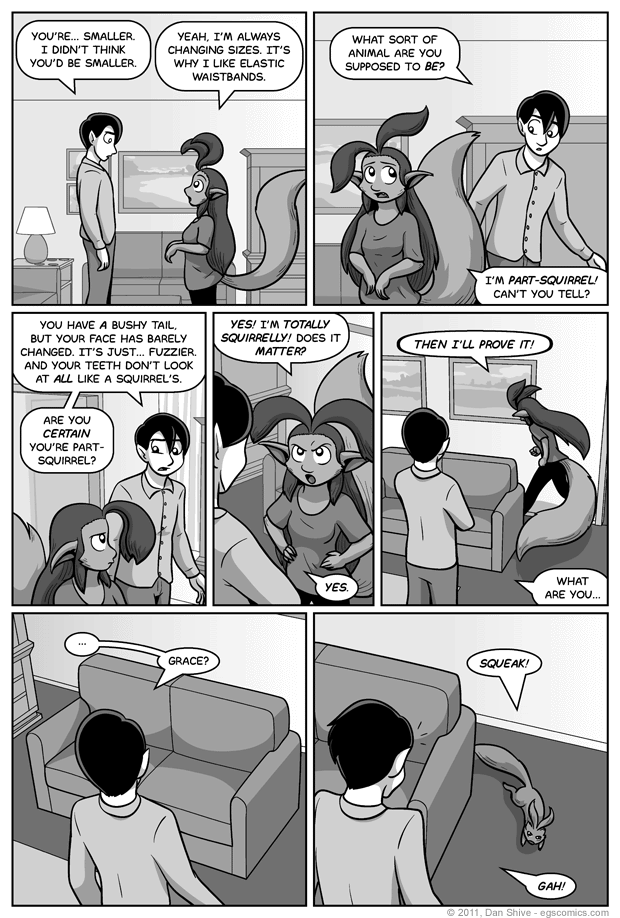 Dude, Raven, don't question a woman's squirrelly heritage! You might as well tell a Klingon they have no honor.

While Grace's half-squirrel form design was initially a little more, um, feral, the only aspect of it that's ever been truly squirrelly-looking has been the tail. I don't think I've ever seriously considered giving her more of a squirrel face, which I think would look kinda scary.

One might think she'd just have buck teeth like Bugs Bunny, but that's not at all what a rodent's teeth are actually like. Ever seen a rodent's skull? It's almost like they have two completely different sets of teeth, and the only reason I say "almost" is because I'm not an expert on the official classifications of rodent dentistry. From my everyday layman dude perspective, however, there is a considerable separation between the front and back of their chompers. That's not a face I want to give Grace.

I've gone back and forth on how big Grace should be in her squirrel form over the years, but I've basically settled on her being a little over 90.6% of her human form size. It doesn't sound like that huge a difference, but it basically amounts to a six inch height difference, making her even shorter than Rhoda in her half-Squirrel form.

What I find sort of interesting, however, is that she doesn't LOOK that much shorter than she did before to me, and I'm fairly certain it's due to the antennae. I can look at panel one and know she's much shorter than Raven, and yet the antennae are messing up my perception of the height difference in spite of knowing that Raven is 6' to Grace's 4'10" in that panel.

I have new found respect for the defense mechanisms of various animals and the animals who are put off guard by them. It may look a little silly when a cat puffs up their fur and such, but that sort optical illusion's got weight to it, man. If my perception can be so easily messed up by Grace's antennae, who am I to judge? Rock on, you weirdo animals.