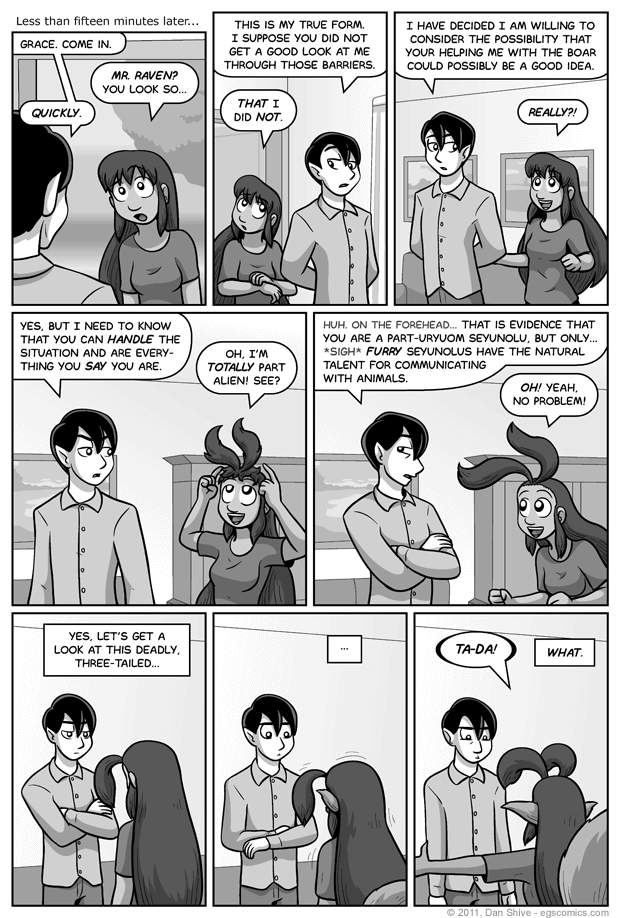 Posted December 15, 2011 at 1:00 am
- Various seyunolu antennae types
- It's kinda hard to get a good look when it was actually someone else there
- Why Raven would assume it was her in the halls
- I love it when characters say "what."

I considered having Raven bust out the full "tulougol seyunolu" term in this comic to indicate that Grace was part-uryuom, but the Uryuomoco terms for the various sub-categories of seyunolus have been busted out so rarely in the comic that I'd have to have him say part-uryuom for clarity's sake anyway, so I decided to just have him put it that way in the first place.

I believe it's proper to call Grace letting Raven assume it was her in the hallway a "lie of omission". She hasn't technically said anything that isn't true, but she's not exactly correcting Raven here, either. That's only not lying if you're a lawyer, or one of those weirdo wise men who live in the wilderness and speak only in riddles and half-truths (but it's okay, because they're weirdo wise men).

Wait, does Grace count as a weirdo wise squirrel? That might be an acceptable variation on the weirdo wise men motif, but she lives in a house, so I'm not sure if that would count.