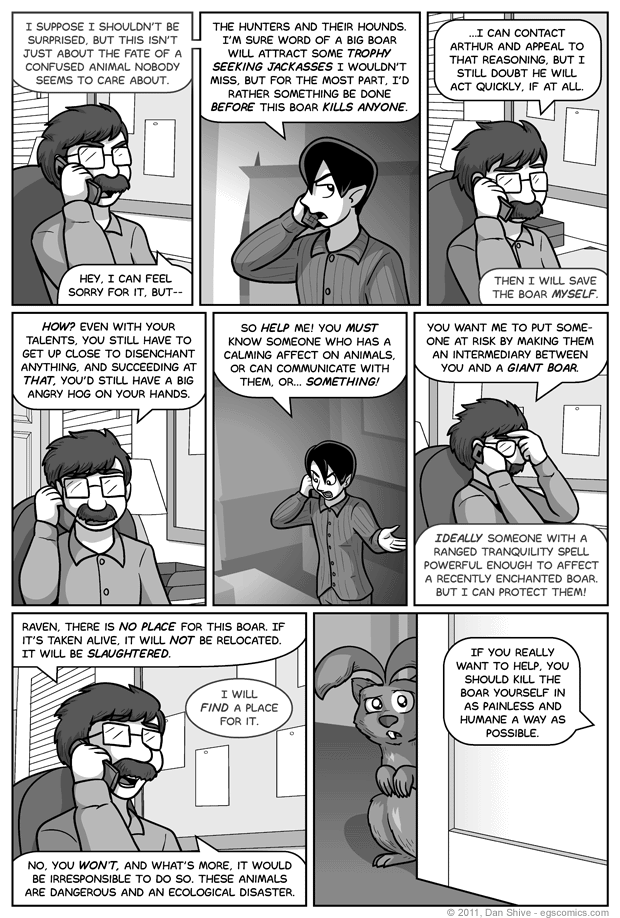 Posted November 21, 2011 at 1:00 am
- Please refer to this comic's commentary if you're jumping to the conclusion that I'm universally anti-hunting based on panel two.

Well, surely when Arthur hears there are lives at stake, he will immediately oh wait, right.

My character in Skyrim, incidentally, has a ranged calm spell that would do the trick. You know, assuming this boar was level 9 or less. And in a video game. This information is probably not useful to anyone. But it did work great on this goat I accidentally set on fire!

In retrospect, I should have had Raven visible in panel one if for no other reason than making it immediately clear that the first bit of dialogue in this comic was his. I believe I made it clear enough at a glance by connecting Raven's first two speech bubble, but the fact that I even confused myself prior to adding that connection pretty much says it all.

I don't know if what Mr Verres says in panel seven of this comic is accurate for EVERYWHERE in this country, but in at least some parts of it (I suspect most), it is. There's just nowhere for them to be relocated to. They're not native to the entire continent, and they're damaging to any given environment you could put them in.

In an earlier comic, Carol mentioned hunters being allowed access, and it wouldn't surprise me if some readers raised an eyebrow to that given the whole issue of hunting seasons. This varies by state, but in some places, it's open hunting season on hogs all year round due to the problems they cause.