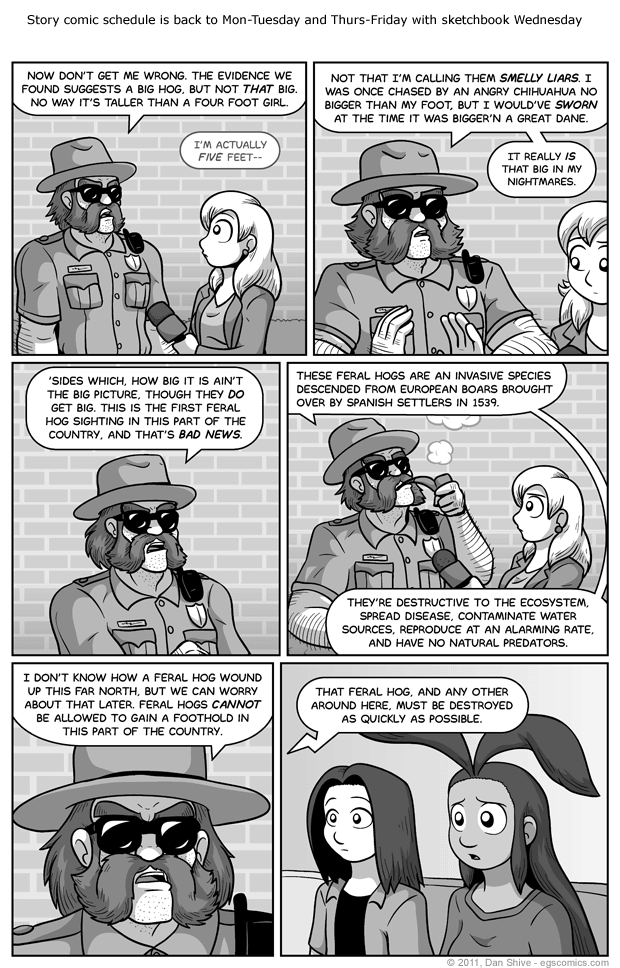 I wish all that information in panel four was made up for the comic, but it's all based in reality. Granted, I'm not sure if Spanish settlers were the only people to bring European Boars over to the United States, but they're the ones I keep seeing getting credit for bringing the European Boars over. From what I understand, feral hogs these days are commonly hybrids of those and domestic pigs, which is apparently resulting in bigger animals.

As for reproducing "at an alarming rate", that alarming rate is as many as two litters a year with 4-8 hogs per litter. Plenty of animals have them beat, but most of the animals that do are smaller and have built in population control in the form of natural predators. Feral hogs throw things completely out of balance for native species, groups of them rooting can destroy entire fields, and on top of all this, they can grow to weigh several hundred pounds and have razor sharp tusks, and even the small ones can be dangerous.

Now, I'm not going to be too judgmental of settlers bringing them over in the 16th century. I can pretty much guarantee that any one of us would have thought bringing them over as livestock and whatnot was a good idea back then. Heck, we probably would've felt like smarty pants for doing so. We didn't have the Discovery channel back then letting us know that introducing non-native species into an environment could be disastrous.

What I WILL be judgmental about, however, is that in spite of the fact that these feral hogs are an ecological disaster, people import Russian boars into the country for the purpose of hunting them in fenced in habitats. Granted, hunting animals in fenced habitats is something I'd wag my finger at anyway, but there are just all sorts of levels of public endangerment here.

I would like to clarify something after that last paragraph, however: I am not universally anti-hunting. I feel it should always have a purpose beyond recreation, be it to put food on a table, keep an overblown animal population under control, protection, etc, and that the animal should not go to waste. SOMEONE should get one or more meals out of it.

Incidentally, would you believe that when I got started working out this storyline, I was simply inspired by the fact that wild pigs can actually get pretty darn huge under the right conditions? I had no idea how deep the rabbit hole went when it came to feral hog issues.