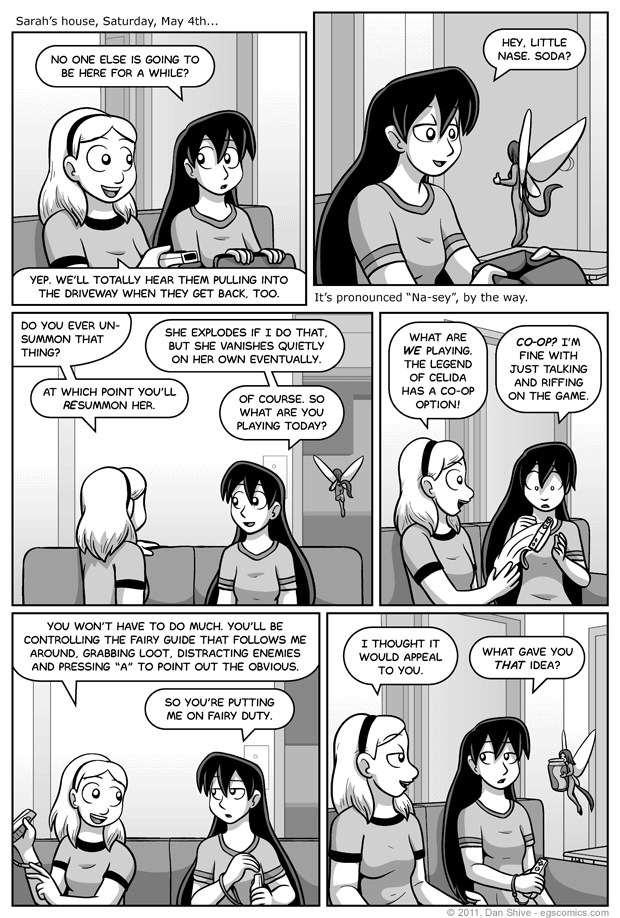 This storyline is intended to be a short and relatively simple one before the next one, which, well... I'm not sure how complicated it will be from YOUR perspective, but from mine? Boy howdy! ...Whatever that means.

I really wish I could summon a "Little Nase" of my own. Seriously, think about it. A little flying person you can control with either conscious or subconscious thought and is able to screw physics enough to bring you a full can of soda. That would be awesome.

I'm sure someone somewhere is going to be annoyed that I included a note regarding the pronunciation (I've been here before), but I would have been annoyed having to answer several perfectly reasonable e-mails asking about it if I hadn't, so nyeh.

As obvious as it is that I'm about to poke a bit of fun at one of my favorite game series, The Legend of Zelda video games, one may wonder why I'm even bothering to go the parody route, especially if I'm genuinely commenting on the series in a manner that would almost certainly constitute fair use.

The main reason is that I'm taking certain liberties and want to be able to make any claims I want about the game(s)they're talking about without it being misinformation. For example, as far as I'm aware, there is no Zelda game out there that allows the second player to control a fairy. There IS a Mario game that does something like that, and I like the idea of a Zelda game that would allow stuff like that, but I don't believe such a thing exists.

That said, I will use upcoming comic commentaries to point out how things differ from reality and provide my own opinions on things.