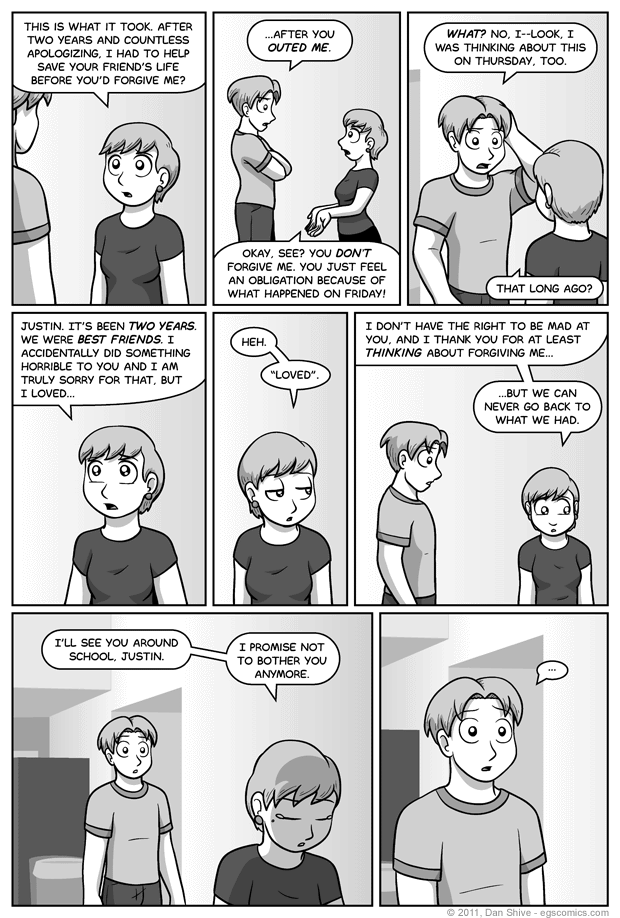 I didn't set out to have a specific message with this particular Justin and Melissa arc. I wanted both characters to do whatever came naturally to them, which I thought I had all figured out long ago. I was wrong. Throughout New and Old Flames, what wound up coming naturally to both characters was not what I had expected, meaning there was a point in the storyline when even I didn't see this coming.

That's the weird thing about writing character driven stories. When one really gets into the heads of one's characters, it becomes apparent that they have minds of their own. I'm assuming not literally, but hell, maybe they do on some quantum level. Perhaps Moperville truly exists, and this comic is merely my interpretation.

Or maybe the grape juice I had with dinner fermented and I'm a little tipsy while writing this. It would explain the pink elephant tap dancing in the corner. Not that he's a very good tap dancer, but you can hardly blame him. They don't make tap shoes for elephants, let alone ones that compliment pink elephant trunks.

Where was I? Oh yeah. I'm very curious to see the reaction to this comic. I'm just hoping lynching isn't involved. The elephant says he's got my back, but I can tell he's got one massive foot out the door.