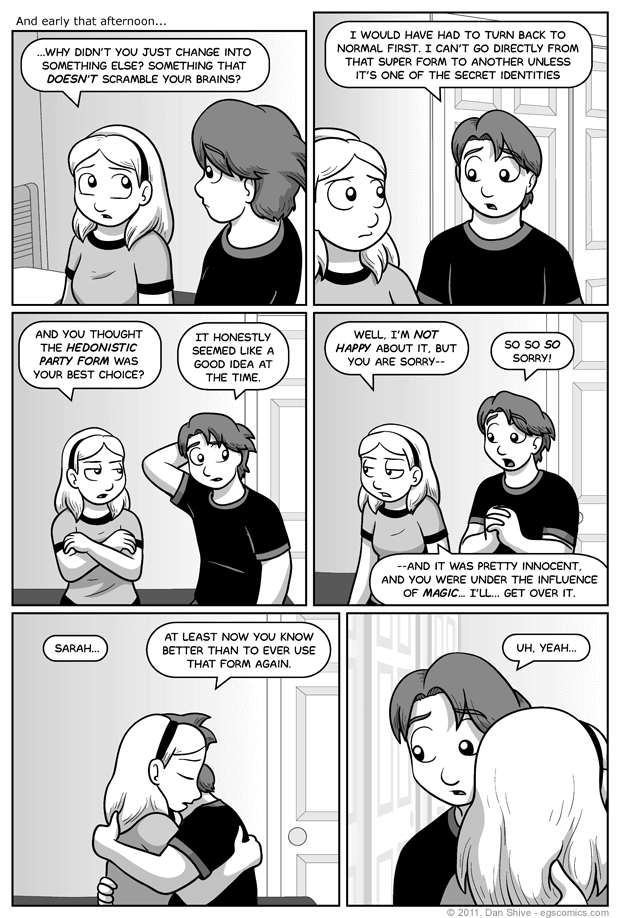 ...I was, uh, trying to sound like Groundskeeper Willie with that last comic link title, but text doesn't make noise, so... BAH!

Anyway, I'm sure this is the last we'll ever hear of these troubles or Heidi.

It's ironic that Elliot didn't wind up acting drunk, because I'm once again going to that analogy well. Kissing someone else while drunk, however, is what this makes me think of. Yes, he kissed his girlfriend's sister, but he was under the influence of something! Then again, it was something he decided to take. Then again again, he didn't know how "strong" it was. Thrice again, he should have figured that out before he drank--er, used the magic. But, um, quadruple again...?

Blargh. Too many agains. Point is, assigning an exact level of blame is a bit tricky. Statistically speaking, however, someone in this comic's universe has an appropriate chart.

So long as we're on the subject, if you're going to drink, do me a favor: know how strong the stuff you're drinking is. Seriously. I was at a new year's eve party where a friend of mine drank the equivalent of 12 shots of something without realizing it. Believe me when I say it was not an ideal way to start a new year.