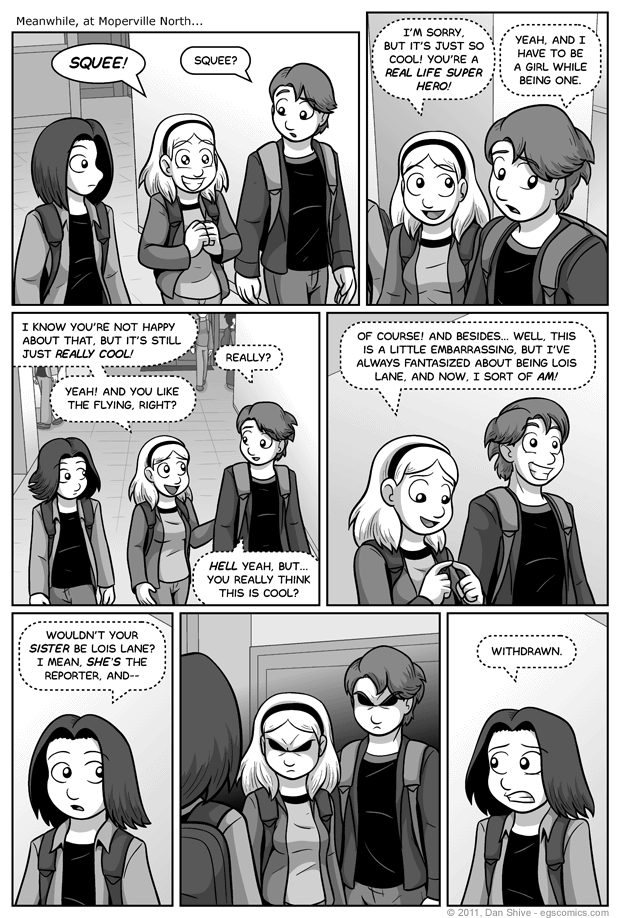 Man. I STILL can't rationalize why Mr. Verres said what he said in that old comic, and I'm the one who wrote it. Over eight years ago. At least that grin can now be considered a, um... well, the gag's certainly not running... A glacial drift gag?

The fact that they have compatible fantasies is something I done thunk up prior to deciding Carol was Sarah's sister, and is one of the reasons I liked the idea of them being related. From Sarah's perspective, Carol is in many ways similar to an older, idealized version of herself who has one of her fantasy jobs.

In short, one of the reasons I liked the idea was because it gives Sarah a source of conflict.

The fact that Tedd seems to have no reason to be in this comic until panel five reminds me of something that I, at very least, find amusing.

The writer's of The Simpsons have made note of a sort of recurring situation in their episodes, that being an out of the ordinary object, outfit, or character being present at the start of a scene. They view it as a telltale sign that the person, outfit or object is going to be part of a joke or relevant to the plot in some way in spite of contributing nothing to the scene prior to that point.

For example, in the Radioactive Man episode, Bart and Milhouse are wearing hats. The odds that those hats are somehow involved in a joke are approximately 10,000%, and sure enough, they are.

This most commonly seems to happen with Grandpa Simpson, who is inexplicably present in many scenes up until having a funny line or plot point to deliver. What I find amusing is that there have been times when he's been animated into a scene before the joke he was there for got cut, so he winds up just sort of being there for no apparent reason in the final cut of the show.

Those angry eyes of DOOM in panel six created a bit of a dilemma for me, namely the dilemma that I wanted it to be clear that this was artistic license and NOT Elliot doing something with his abilities. I really like playing around with the visuals, but at this point in the comic, it can be tricky to make it clear what is and isn't truly happening.

In most cases, it's pretty obvious (I hope) what is and isn't artistic license, but something I had considered putting in panel six was a sort of fire effect in the background. Given existing canon, however, that's something Elliot could actually make happen. It's been a while, sure, but given recent events, it didn't seem like a good idea.

In this case, however, I'm actually sort of glad I didn't go that route. I think the fire background would've probably been overkill.