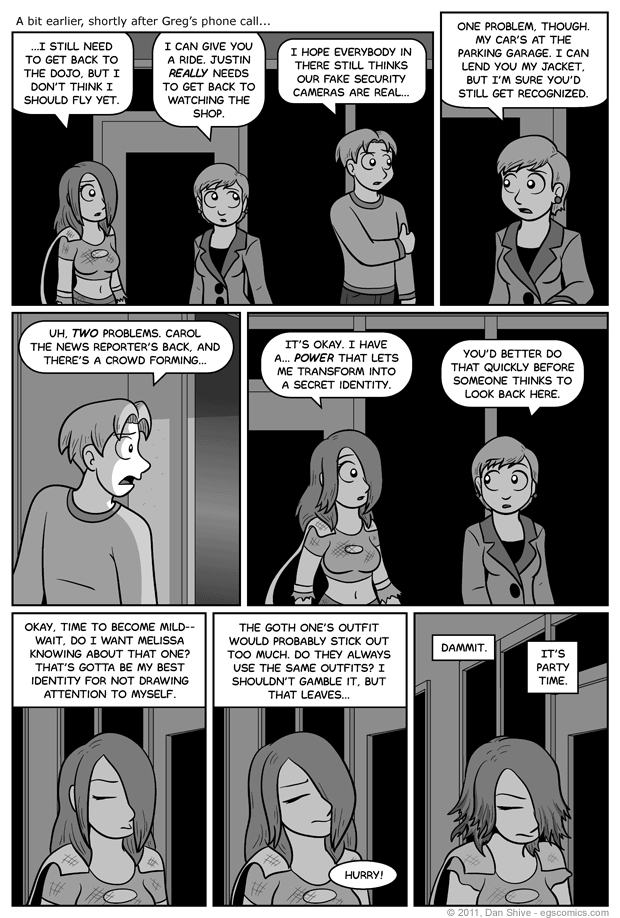 Much like when I decided I would name my comic "El Goonish Shive", one can almost sense the eventual "it seemed like a good idea at the time" feeling about this decision.

Oh, and as tempting as it is, Elliot will not be turning into Pinkie Pie.

The cameras... they do nothing!

When the fire monster showed up, George might not have been working, but at least he was there while Justin was outside. Then again, there were both outside later... did either of them check the inventory after that?

But I digress. This is the sort of detail I fuss over. I didn't want George present during this whole combat thing because he would have further complicated it without really adding anything necessary, but that still created the whole issue of nobody watching the Kwik-E-Mart--I mean, the comic shop. This bugged me, hence that bit of detail.

Incidentally, my current comic shop of choice does employ cameras, and they are totally for reals. I know, because they have a huge monitor behind the counter that's easy to peak at. They were installed shortly after a very busy Magic: The Gathering pre-release tournament, which makes me wonder how much of a coincidence that was and whether there was evidence of bad behavior post-tournament.