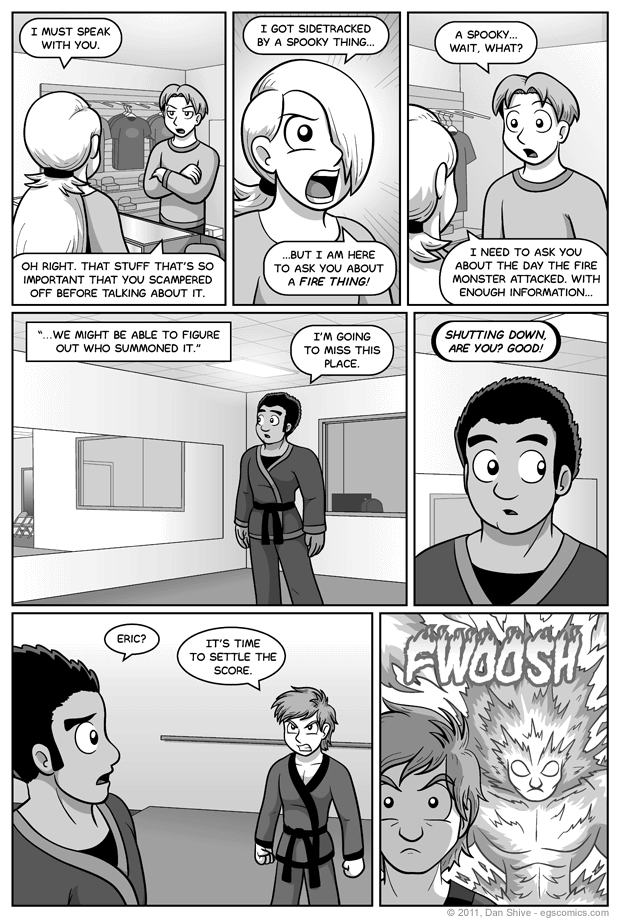 Really, I expect to receive several awards for the epicness of the epic dialogue in panel two of this comic. It's just...

Don't think I'm going sit on my laurels, however. I'm going to have much more epic dialogue in the future. Spooky thing-a-ma-jigs, fire what-cha-ma-callits, etc. It's going to be incredible.

I'm about to get all mildly technical up in this commentary, so buckle up.

Like so many other things, I've made a 3D set as a reference for the dojo. One thing SketchUp doesn't do, however, is reflective surfaces, which is kind of an issue if one's going to have a huge mirror in a scene.

Fortunately, I've had to deal with a mirror before, and I did here what I did then: I copied the entire dojo, rotated it 180 degrees, flipped it as a reflection would be in a mirror, positioned it parallel to the "real" dojo model, and huzzah! In the 3D model, that "mirror" is actually an opening in the wall that lets one see the mirror version of the dojo.

The beauty of it is that, from the program's perspective, it's two instances of the same dojo. This means editing one side will edit the other, so any changes made to the dojo will be reflected in the, well, reflection. None of the character's reflections are seen in this comic, but it and when they are, this fact will make it easy to keep track of where everyone and their reflections are.