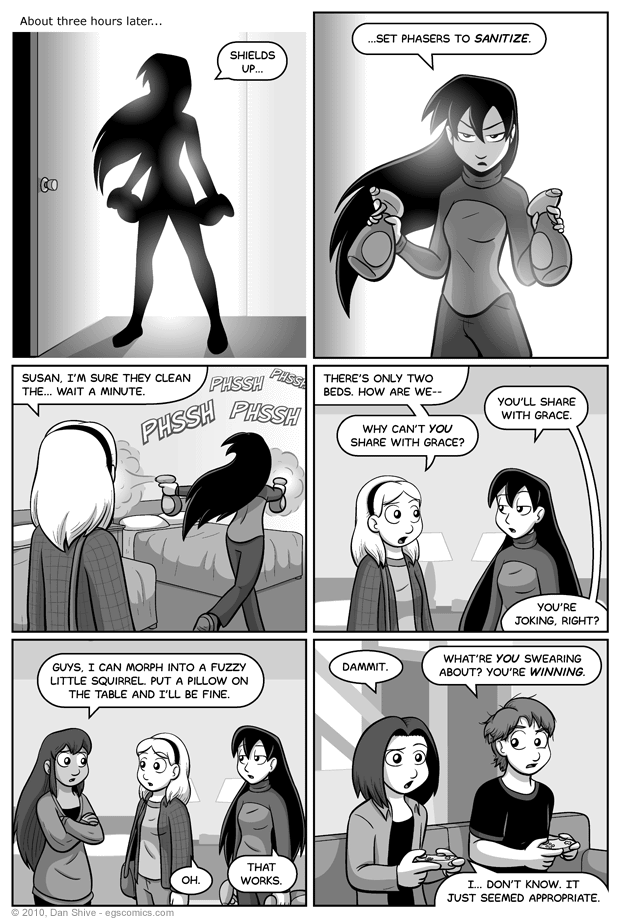 Posted May 17, 2010 at 1:00 am
As you can plainly see, I have completely forgotten about Susan's trip to France. And Sarah's issues with Elliot, the hammers, and the true meaning of Christmas. Naturally, the next comic will be about something that happened in Canada, Grace glomping Tedd, needle-nose pliers, and the joys of commercialism.

Okay, so seriously and for reals, this comic masterfully builds on previous events in the comic, much like how those awesome Star Wars prequels built on the original movies.

Back in Night Out, Susan was super smart and objected to people putting their butts on her kitchen counter. Seemed reasonable to me, but some people started to characterize her as a clean freak. Being an assertive gentleman who always does as I'm told regardless of my personal feelings, I've decided to build on that.

Of course, I don't think she's being a clean freak here. She's being super smart. Have you seen those fear mongering specials on hotel rooms they show on slow news nights? Yeah. Susan knows what's up.

Meanwhile, it's been well established that Tedd has a super power that let's him sense moments of sexy awesomeness. It could only really help him save people if there was a fire at a lingerie party or something, so he hasn't bought a cape yet. It's still cool that he has a super power.

What makes this comic all the more exciting is the revelation that he can also sense something sexy awesome almost happening, which could, of course, change everything. If you're a retailer of custom capes, you should get your marketing gurus working double time to make sure your website catches Tedd's eye first.

And then there's Elliot's hair getting messed up while playing video games. Most people think this is because he's not doing well and he's trying too hard, but he's just sensitive to static electricity that builds up in the controllers as he plays. He goes through about a dozen controllers a week, and top scientists from Hawaii have yet to figure out why. I'm sure it will be an important plot point eventually, so stay tuned.