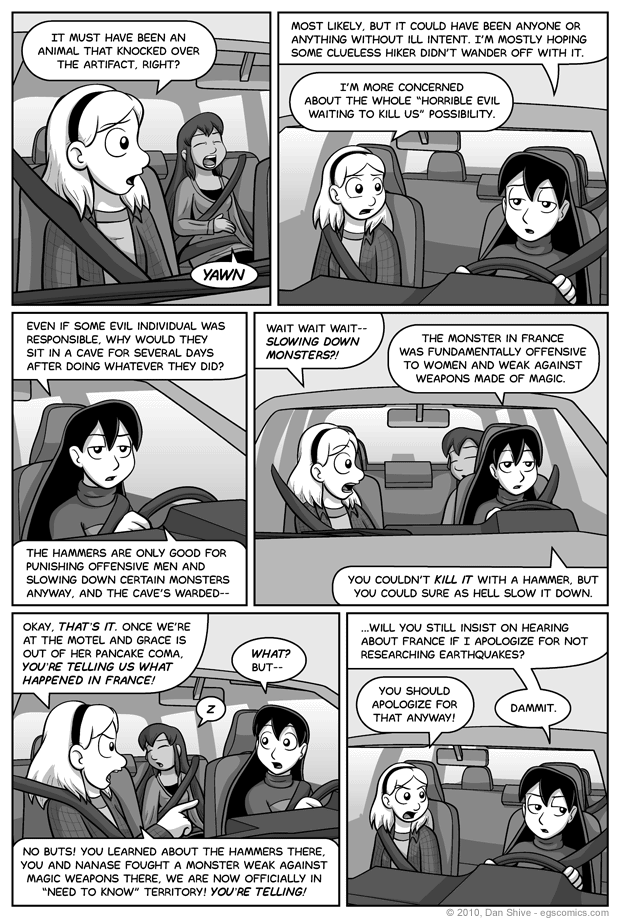 Posted May 14, 2010 at 1:00 am
You can only talk about something without giving the details so many times before people demand to hear more. And before anyone debates whether Sarah is being hard on Susan, keep in mind that she did ask if Susan was sure about the whole earthquake angle.

I'm just going to let this cat out of its bag: while much will be revealed, there will NOT be a super-detailed flashback of Susan and Nanase's trip to France. The length of such a thing would be a storyline unto itself. Beyond that, wait and see.

I will say that I'm looking forward to getting these three out of the car. There's only so many camera angles and poses that work in a car without making the characters look reckless, particularly when dealing with the driver.

One may have noticed that Susan spent most of these comics looking forward, even while pointing at various parts of Sarah's anatomy. This is in large part due to me finding it very distracting when characters who are supposedly driving in TV shows and movies take their eyes off of the road for too long. It seems like almost every episode of Bones has at least one scene where I'm shocked they don't hit anything.

I know why they do it. It's more visually interesting if the characters turn to look at each other and interact, and we are after all talking about a visual medium. It's just one of those minor details, however, that I find distracting.

OOH! I just realized this gives me an excuse to talk about the Midsomer Murders, a British mystery series I happen to be fond of. The main character is Chief Inspector Barnaby, and he has a Sergeant named Troy. Troy is generally a good detective, but he has a terrible habit of taking his eyes off the road and having near accidents, particularly if they're speeding to get somewhere and Barnaby is giving part of the mystery's summation. There's driving realism for ya!