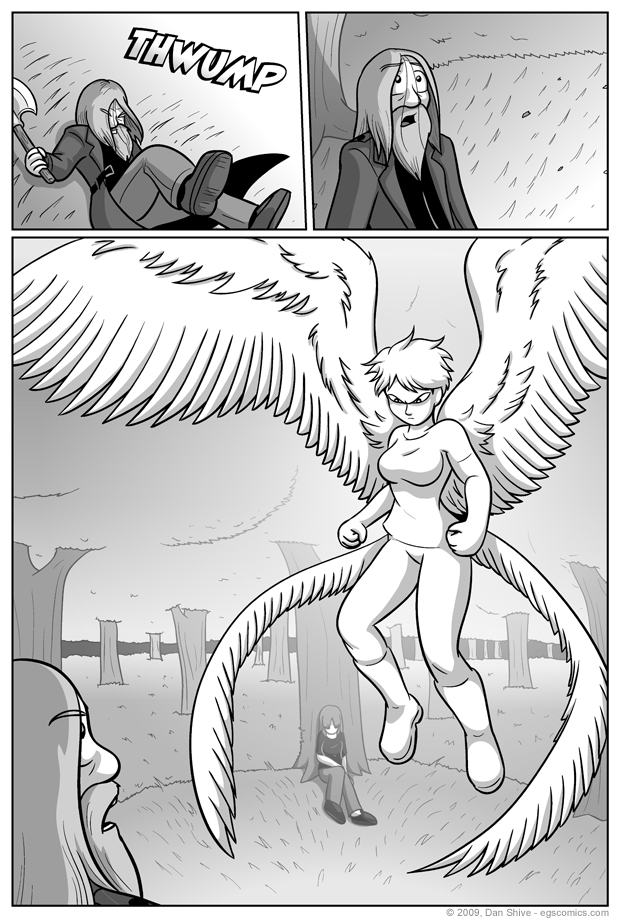 
This and the previous page were originally one update, so this commentary is for both.

Now would be a time to give the cover of this arc another look.

Secondly, Angel Nanase's wings may not be perfect, but they'd look much worse if not for a tutorial I found on Deviant Art. I actually forgot I had it faved up until a couple of days ago, so it was a pretty close call ^^; Many thanks to its creator.

This is the sort of update that was little weird to work on due to how certain I am there will be negative reactions, primarily due to the presumed assumption that "Nanase's gonna win super easy now!" Refer back to the first Sister arc for Tedd's cautionary note of "so much conclusion jumping..."

Of course, it may be that I need to pay attention to Tedd's sentiment myself, but I have my doubts. I'm putting on a flame proof outfit before checking for reactions.

Anyway, everything about the angel avatar, form, doll, or whatever it is is the way it is for a specific reason, including the distortion of some details and the lack of any gray beyond the shadows. I actually wanted to draw her without a mouth (and yes, there's a reason), but when I tried to picture upcoming moments with her sans-mouth, it just seemed too weird, and that's saying something.

Deciding what Angel Nanase would be wearing was tricky. I considered everything from a new outfit to no outfit (nothing scandalous showing, of course) to feathers. That's right, Angel Nanase almost wound up covered in feathers. Oh, what a world that would have been. In the end, I simply decided to effectively bleach and obscure the outfit she was wearing prior to casting the spell.

It might be worth noting that this form had an impact on the design of Nanase's haircut. I knew I wanted something compatible with sufficient spikiness potential, and was kept in mind when going through Nanase's redesign.

As a final note, I mentioned listening to Nightwish a lot while writing / drawing this arc? They have a song called Wish I Had an Angel from their Once album. I have been listening to it quite a bit lately ^^;