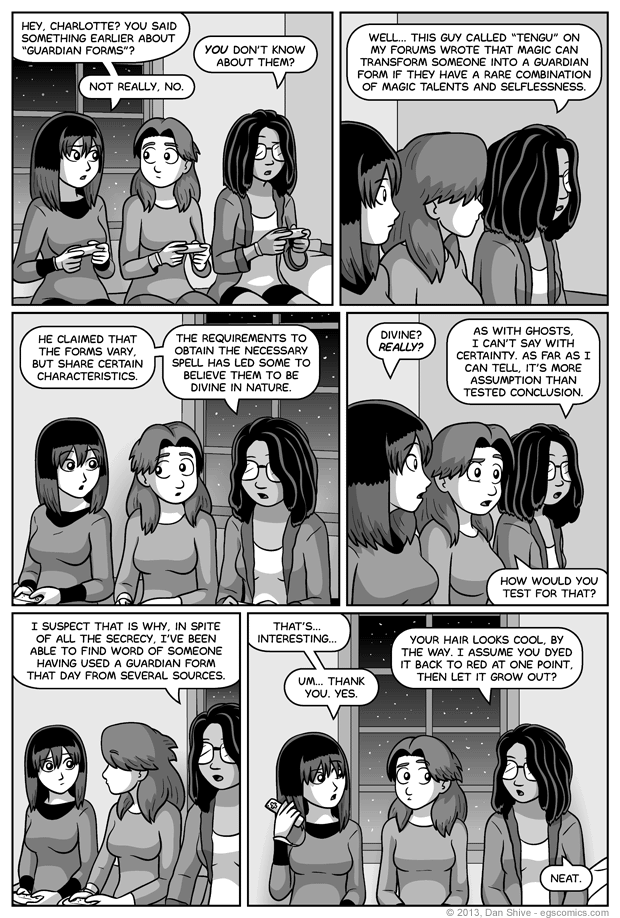 Oh hey, an in-comic mention of Nanase dyeing her hair! FINALLY. Har-umph, and so forth.

This comic was originally going to immediately follow the comic with Ellen confirming that she and Nanase were a super good choice for investigating spooky stuff, but I thought that would be an over-saturation of exposition and instead decided to show the previous two comics first.

Of course, now people are going to curse at me for momentarily shifting gears to this when they're wondering why all the male guests have become female (assuming they noticed), but this comic had to go somewhere, darn it!

As for the "is it divine" stuff, I prefer leaving that open to interpretation unless there's something that definitively says it's not. So, basically, the answer either boils down to "no" or "it's open to interpretation and/or personal belief". I prefer not letting the characters be any more certain of that sort of thing than we are, so if they do believe something like that to be true, it will be due to their faith and not because I drew a holy being telling them "yee-yup."

The above paragraph is basically what I planned to write in the "thanked God all the same" comic's commentary, but I was having trouble sorting out how to say it, so I resorted to summoning a demonic duck and running away (which is, fittingly, how I deal with most religious debates).

Incidentally, while I'm bound to reiterate this later, I'd like to point out that I am not anti-drinking or trying to convince people to stay sober all the time forever. I would, however, like to encourage drinking in moderation and safety and say that Rhea's intentions were basically in line with my own thinking. She just kinda-sorta messed up that whole "be the good example for her sister" bit by overdoing it herself.