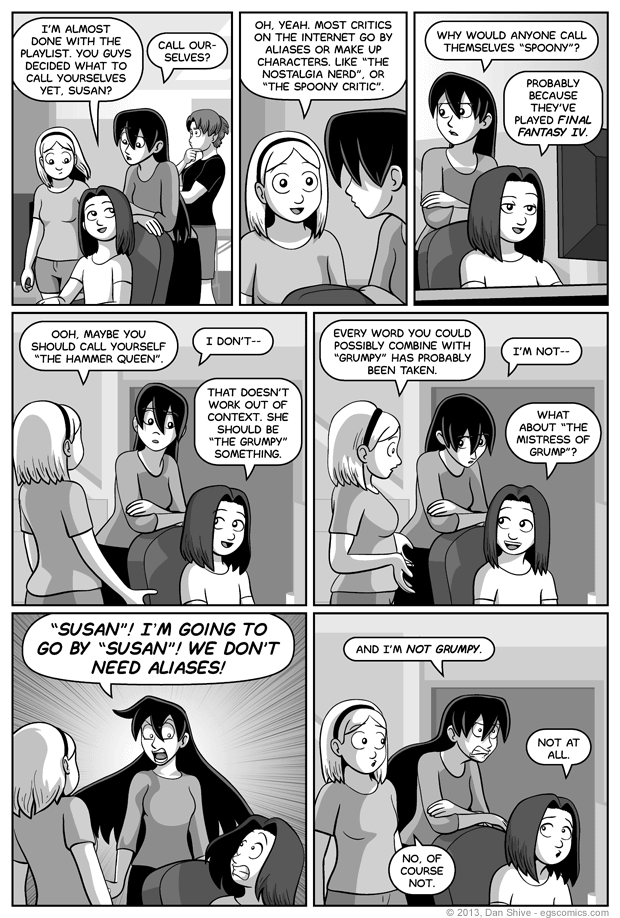 Posted January 2, 2013 at 1:00 am
NOTE: Friday's comic will be posted sometime during the day on Friday, but there will be a Friday comic.

Man, I can't wait for this scene to be over so I can get Tedd out of that white T-shirt.

ANYWAY, my one real regret in this comic is that I had to cut a line about people assuming Susan is a fan of Hammer horror movies. It was cut due to the simple fact that there wasn't room in the panels for it. Heck, it was a bit of a puzzle just figuring out how I was going to arrange the three characters in each panel while still leaving room for text that would read in the right properly.

This comic references three actual critics, though none of them are properly named. Before I list them, I will note that many of their videos do contain a fair amount of swearing and other content some may find objectionable. Such things don't really bother me, but fairly warned be ye.

The real critics are The Angry Video Game Nerd (James Rolfe), The Nostalgia Critic (Doug Walker), and Spoony (Noah Antwiler). The name Spoony always made me think of a bard from Final Fantasy IV who was once referred to in-game as "a spoony bard", and I was delighted to later learn in one of his videos that FFIV pretty much was indeed to blame for him going by that name.

The whole alias thing isn't unique to them, however. There are hordes of internet critics who go by other names and/or adopt the role of characters when doing their reviews. In some cases, I think it works well. In others, I don't, and I'm not entirely sure why I feel that way. I think it might be the distinction between just using an alias and playing a part, or maybe when I see something like the word "The" in front of a name, I feel it is a title that must be earned, and perhaps I don't feel it has been in some cases. That may be a bit snooty of me, but...

Wait, wait, sorry, I'm getting all introspective and junk. I knew that was going to happen when I bought this psychology sofa, but it's just so comfortablzzzzzzzzz...