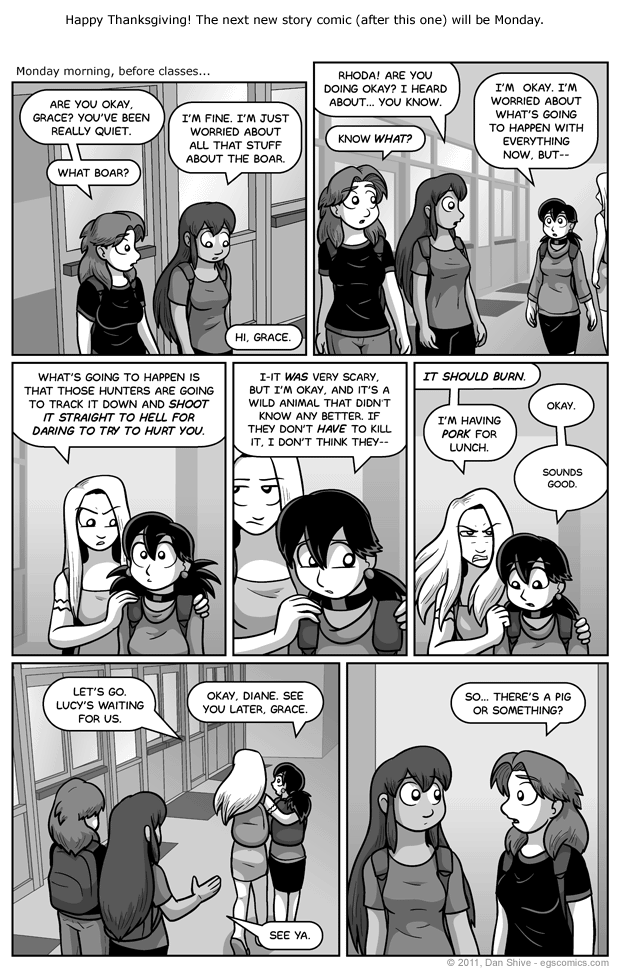 My brilliant scheme for the week of Thanksgiving in 2011 was to change ABSOLUTELY NOTHING about the comic schedule in light of it. Sure, I'd eat a turkey and all that jazz, but I didn't think such behavior called for any sort of change to the schedule.

And then, it hit me: Writer's Block. And what's really frustrating about it is that it was a block regarding an area of the script that wasn't planned out well in advance due to how ultimately trivial it was, and that aspect of the script was what Ellen and Grace would be discussing as they entered the school.

The thing is, as much as I wanted this scene with Rhoda sharing her own view as the one having been the actual target of boar rage, Ellen's pretty much entirely unnecessary to this exchange, and yet she and Grace are practically glued at the hip. Ellen drives Grace to and from school, they have the same group of friends, the same class schedule, the same locker... I found myself unexpectedly bewildered by the simple fact that whatever this exchange was going to be, Ellen was going to be part of it.

In the end, I'm highly amused by the simple solution of Ellen simply not having heard about the incident yet, which I think is a nice contrast to Tedd hearing the news almost instantly. I just wish this approach had occurred to me earlier, as I'm literally writing this commentary at around 3:10 in the morning Thursday shortly after posting the comic. This Thanksgiving, I'm mostly thankful for finally being able to go to bed and the suspicion that the majority of my readership will be too busy with the holiday (and Black Friday shopping) to care much about my taking Friday off.