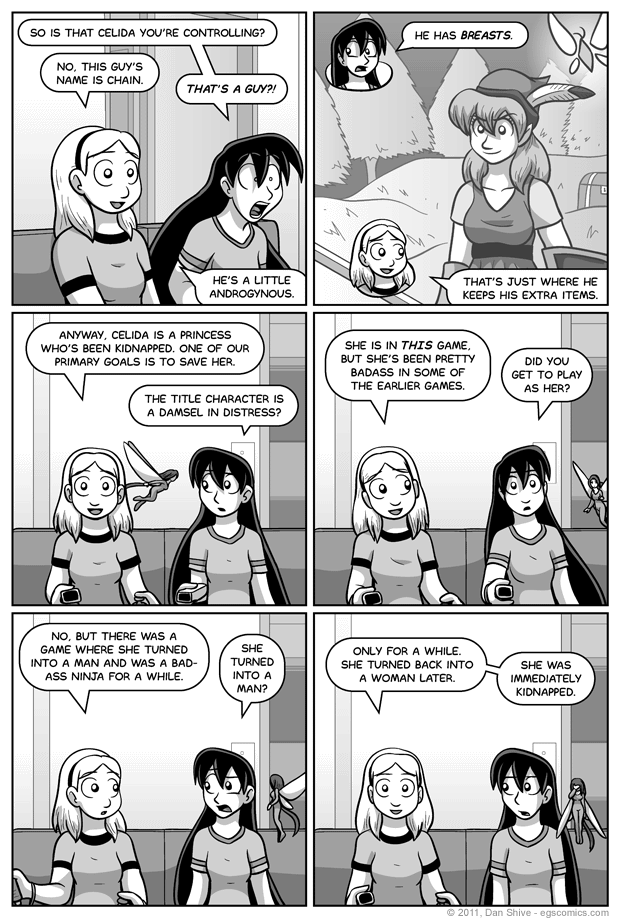 I personally think the main protagonist of The Legend of Zelda video games, Link, is about as manly as a man can be while wearing a tunic that makes him look like he's wearing a skirt, but who am I to pass up an androgyny joke?

It is both technically true that players have been able to play as Zelda in a couple of Zelda games, and technically not true. I personally don't count the games you could play as her in as actual Zelda games. They weren't made by Nintendo and only exist due to a very bizarre licensing back story.

I find the idea of being able to play as Zelda in a game interesting, but what sort of game would it be? A normal Zelda game with just Zelda in place of Link doesn't seem that interesting to me, but I'm not sure what you'd do instead. Of course, if Zelda's abilities differed drastically from Link and you used a whole mess of magic or something, that could be another story.

Celida turning into a badass ninja is inspired by Zelda's ability to become Sheik in The Ocarnia of Time. The gender of the Sheik form is open to debate, and I will elaborate on my own opinion in the next comic's commentary.

I will say this, however: some people have claimed that it's "just a costume". Unless it's a magic costume that adds body mass, adjusts the skeletal structure, and changes her skin, hair and eye color, it's NOT "just a costume".

I also invite anyone who claims she just uses padding to try wearing the amount of padding that would be necessary while keeping the entire getup convincing and still being able to move freely. If you can pull that off, what are you doing debating Zelda on the internet for? You have a bright future in cosmetic special effects!