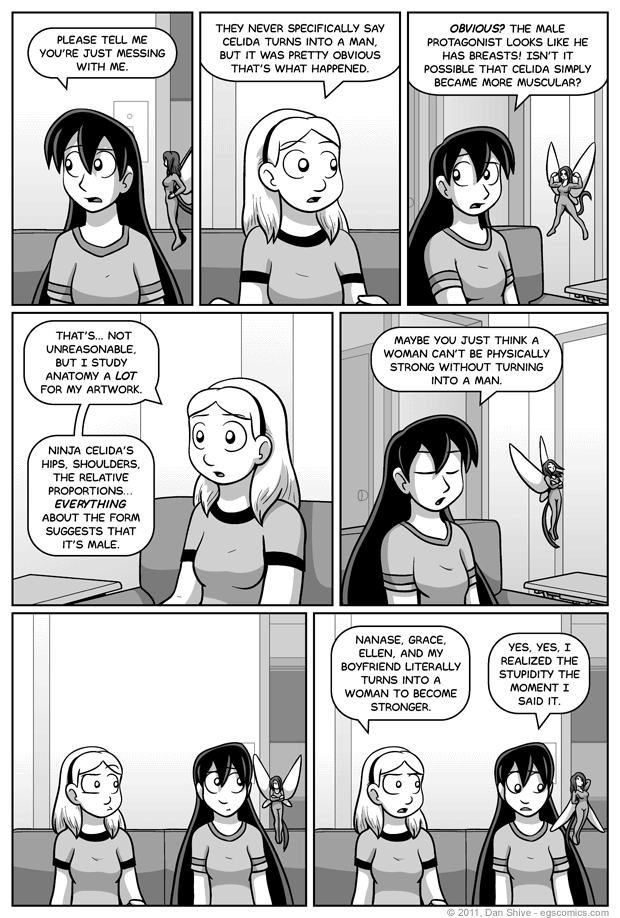 Posted October 14, 2011 at 1:00 am
Susan's counter in panel five of this comic is one I've actually encountered while debating whether Zelda's Sheik form was (or simply could be) male. While Sarah's counter to that counter is in regard to her own outlook, the Ocarina of Time video game itself has grounds to defend itself when it comes to the potential badassery, physically based or otherwise, of their female characters.

For one thing, whether Zelda assumes a physical male form or not, she's still a woman who was badass enough with magic to be able to learn and pull off such spells. She's a proactive character who was instrumental in the saving of her own land.

There is also the fact that the person who trained Zelda was Impa, another female badass. Then there's Malon, who I can't recall doing much, but she was a farmer and I don't think there's a farmer who exists who isn't a badass on some level or another. That stuff's hard work, darn it.

There are also other strong female characters, and a race that is almost entirely female, the Gerudo. The Gerudo were tough warriors and definitely not women you'd want to mess with. The only thing I'm sort of disappointed by about them is I remembered their lore a bit incorrectly. Ganondorf was the only male Gerudo, and I thought he was a complete anomaly. Catching up on some of the lore, however, there's apparently a male born every 100 years who is their king by default? I'd love it if I got some bad info in that regard, as I find it disappointing that a society that was over 99% female would still be a patriarchy.

In any case, believing that Zelda turns into a man when Sheik does not automatically make a person, or the game, sexist.

...Even if that Gerudo thing is disappointing and I hope my inbox gets flooded with people telling me that's inaccurate and that mean old Zelda wiki was lying to me.