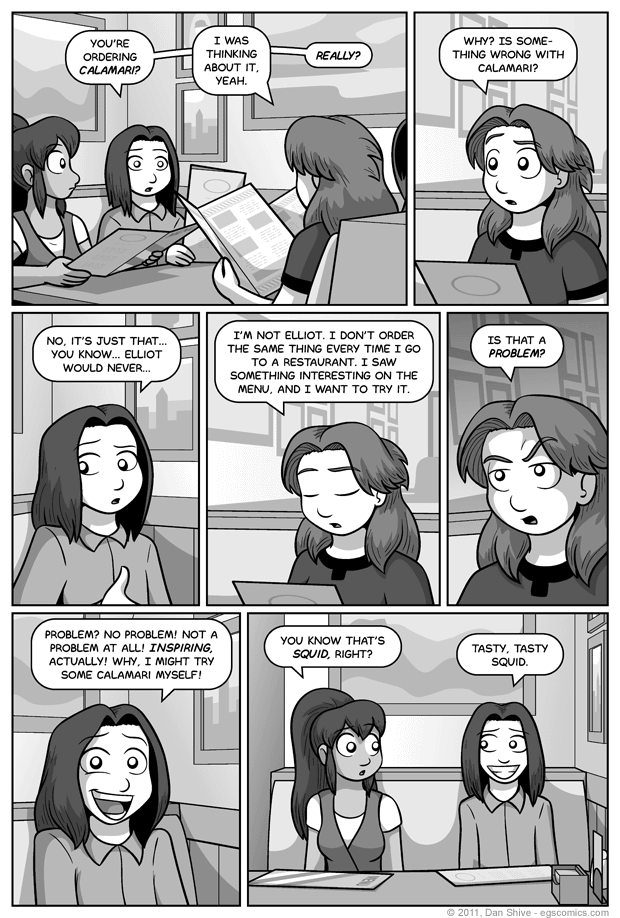 In Tedd's defense, his interactions with Ellen have been relatively limited.. Nonetheless, I feel the following "dude" is justified:

The previous comic resulted in a lot of people telling me their ordering habits at restaurants, which I genuinely found fascinating. Seriously, about half of any given day of my life (while awake) is spent trying to figure out why everybody else behaves as they do. Another 25% is spent trying to figure out why I do everything I do. The remaining 25% is devoted to trivial things, like making comics and kicking dragons.

The previous comic also resulted in a lot of people asking "what's wrong with calamari", which I also found interesting. The question implies that the one asking it assumes that I am taking Tedd's side of the debate. I'm not saying whether I am, as my viewpoint could potentially be a spoiler given present circumstances, but I find it interesting given that Ellen's attitude was favorable, or at least willing to give it a try. Would the same question be asked if Ellen had been narrating, or do people just assume I'm more like Tedd than Ellen?

Or am I over-thinking this, and was the question simply "why would Tedd take issue with calamari?" I think this comic answers that question, at least. There are plenty of people who do not light up at the opportunity to eat mollusks.

In any case, if for whatever reason you want to rant in my general direction, the link to the contact page can be found in the menu towards the top of the page. That, or, you know, click here.