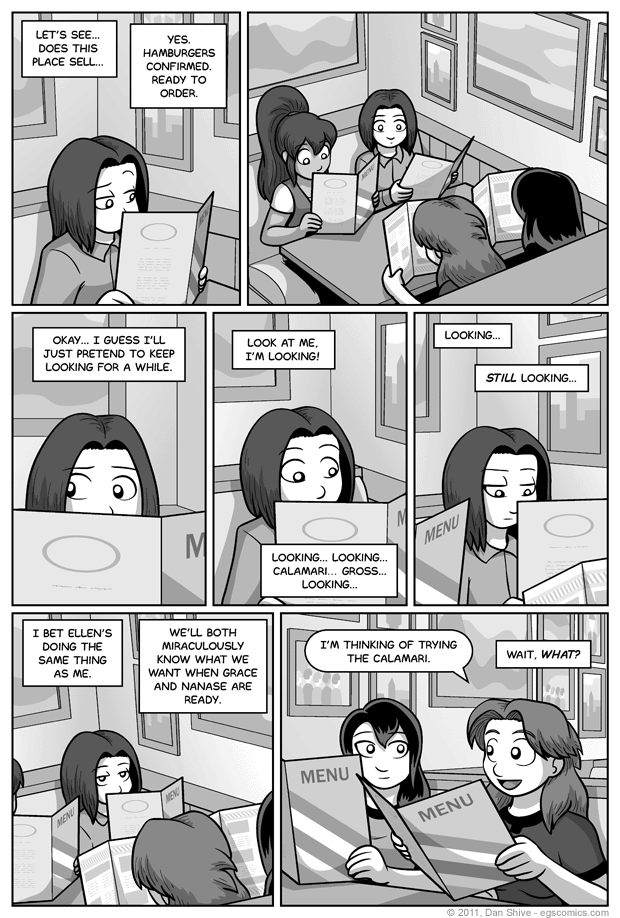 Posted September 1, 2011 at 1:00 am
- Want to see those AMAZING background pictures up close? Check out this sketchbook

Raise your hand if you've ever been in Tedd's shoes. Don't worry about me not being able to see it from where I am. I shall perceive it through the rhythm of reality by holding to my ear the conch shell of the ages and whistling once the tune of infinity.

That, or you could just let me know some other way. Whatever.

I, for one, have been in Tedd's shoes. Unless I haven't been to a restaurant before, I usually know what I want to have or try before even entering the restaurant. The people I'm with, however, usually like to explore the menu for a bit, and generally won't have much to say while doing so because, hey, they're busy with the menu. So I pretend to keep looking myself, because pretty much anything else I could be doing would just potentially distract them from making their choices faster.

A benefit of this, however, is that I sometimes discover something else I'd actually like to try, which adds merit to the theory that it's all a conspiracy to get me to try new things.

The most complicated part of this comic was the menus. Their design is intentionally simple and what-not, but I'm not used to the amount of trickery that went into getting them in proper perspective for everyone holding them in this comic. It's the sort of thing that will be easier in the future now that I know what I'm doing, for this comic at least, I think it took longer than any other step.