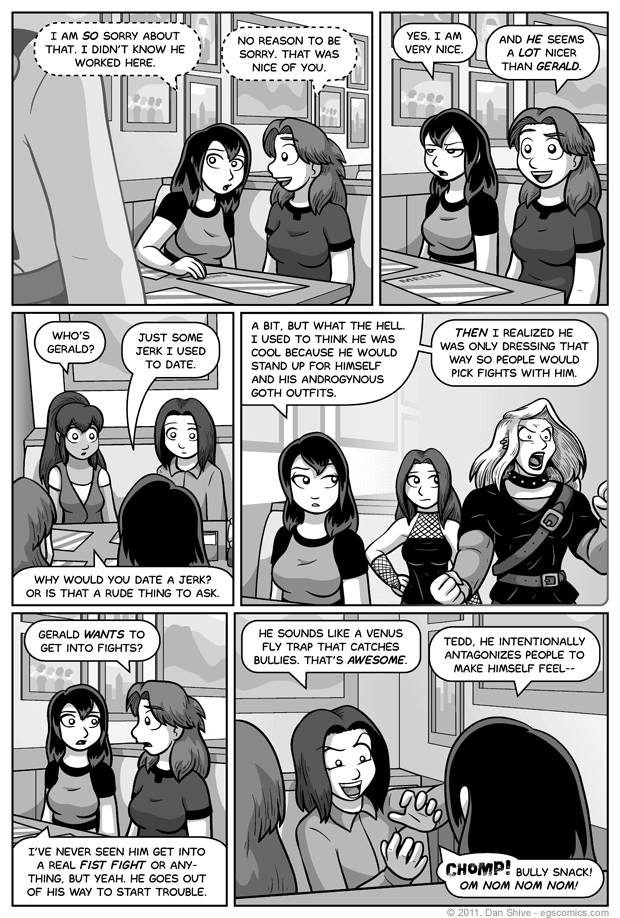 It is entirely possible that the ethicality of Tedd's perception of Gerald's behavior is somewhat biased.

Gerald has apparently beefed up since his last appearance! Or... wait. His appearance here is technically a flashback. He's beefed down? Oh, whatever. Added beef can accurately be attributed to art style evolution.

It is not my intent with this comic to paint people who dress in goth-esque fashion with a broad brush. For one thing, I've gone on record saying that I like goth fashion. Heck, I used panel four as an excuse to put Nanase in black clothing and fishnets.

For another, I'm fairly certain that deliberately making oneself a target is not a common motive behind what one chooses to wear. A bit of a rebellious motive may be common in high school, certainly, but the implication here is a bit beyond that. I'm assuming "I'm wearing what I like and to heck with the squares" is a much, much more common motive than "I'm wearing this hoping people will give me crap about it". I'm also assuming "squares" has remained in common parlance.

That is not to say, however, that what Nanase is suggesting in regard to Gerald's motives is based entirely in fiction. I've known people in real life who may as well have worn t-shirts saying "I want you to confront me about my t-shirt".

Speaking of which, it wouldn't surprise me if a t-shirt like that existed. I'm not sure what the actual outcome of wearing such a shirt would be, but I imagine it would involve a lot of bad jokes from random people.