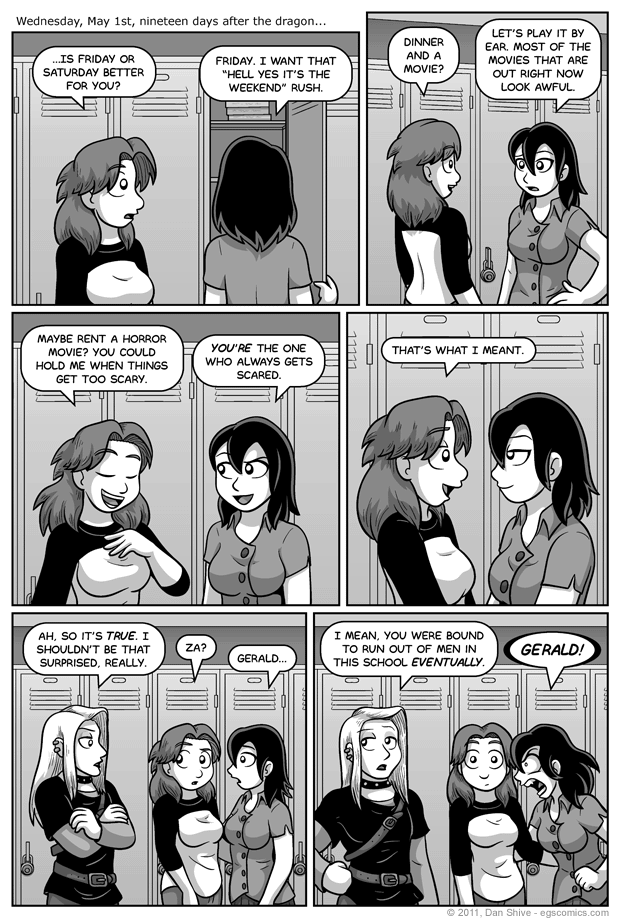 Nanase's letting her hair grow out, which apparently happens rather fast given that her last appearance was almost exactly three weeks ago in the comic's universe. It's worth keeping in mind that this is a universe where waist-length hair is relatively common and almost any given color is a natural hair color, however, so it's fair bet that it's not that strange for them.

Or maybe Nanase's just weird or something. It only really impacts how rich the barbers in this comic's universe are, so it's not all that dire.

There's not much I can say about his design at this point, other than it's probably not a good sign that he's wearing a belt as though it were a sash. It might be marginally acceptable if he had a quiver of arrows or something, but it's just... there. Is he fearful of someone removing his shirts against his will? These are all things I should know, given that I drew him, but it baffles even me. WHAT IS IT FOR?!

I suppose I should also be asking what the collar is for, but I think the answer to that is obvious. He wears a collar. Collars are cool.

...What? Just you wait. Any day now there'll be a Doctor Who episode that solidifies this position!

Back to Nanase again, her outfit is somewhat like a short-sleeved version of something Melissa wore earlier. This is apparently a fashion I like, along with over-sized sweatshirts and baseball jersey-like shirts. I tend to keep the main cast wearing slight variations of the same clothes, if for no other reason than to keep things easier on myself, but I like to vary Nanase's outfits a bit more.

Speaking of clothes, the shoulders and and sleeves of Ellen's shirt were originally a light grey, which would have been fine if not for the lockers making her look like she was wearing some sort of highly ineffectual camouflage.