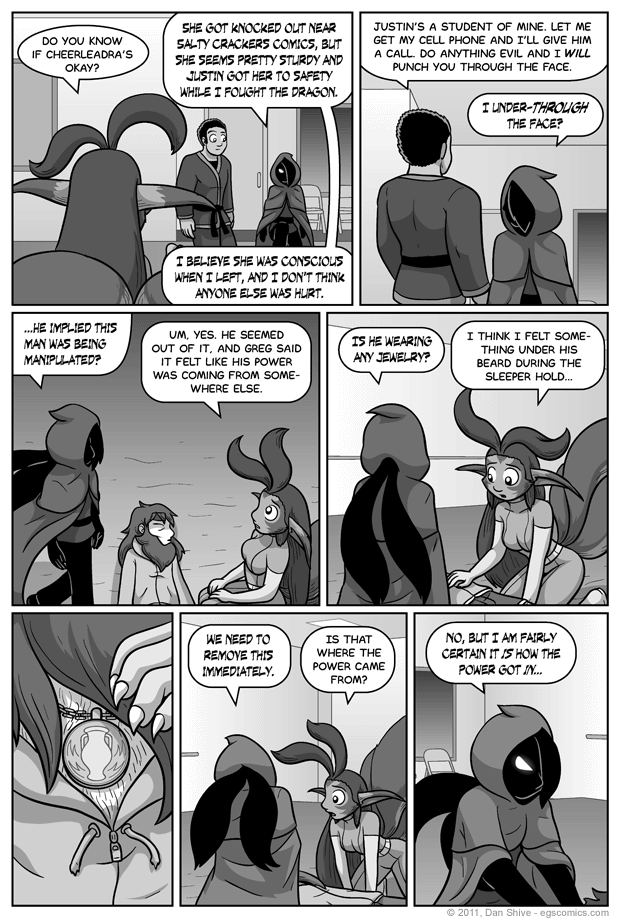 Posted May 23, 2011 at 1:00 am
- I swear I'm not really supporting head-related violence as a deterrent
- Why Noah suspects "she" was conscious

I was tempted to put a "Z" by Dex in panel three just to make clear that he wasn't dead, but I think the fact that Grace isn't bawling is evidence enough that Dex is still breathing. And Noah saying they need to remove the pendant. And... yeah. Why am I worrying about this? He's alive. Let's move on.

This is one of those rare cases where the fact that most of the photographic life drawing references I have are of weird poses was useful, because I totally have plenty of references for people sitting or crawling on the floor. They're almost always useless to me outside of practice, but they helped me a lot with drawing Grace in this comic, so I've gotta give them that.

As I've probably commented on before, the majority of the reference photos I can find are female. I'm still not sure if they assume guys are easier to draw, or if the books just wouldn't sell as well if they had a more even distribution of gender, or whatever. I just know good dude references are harder to find.

In any case, I've got to remember that I have those. There've been plenty of comics during this storyline that probably would have been easier to draw had I made use of my reference hoard. I was trying to think of a better word for it, and I'm sure there is one, but I kinda like the sound of that.