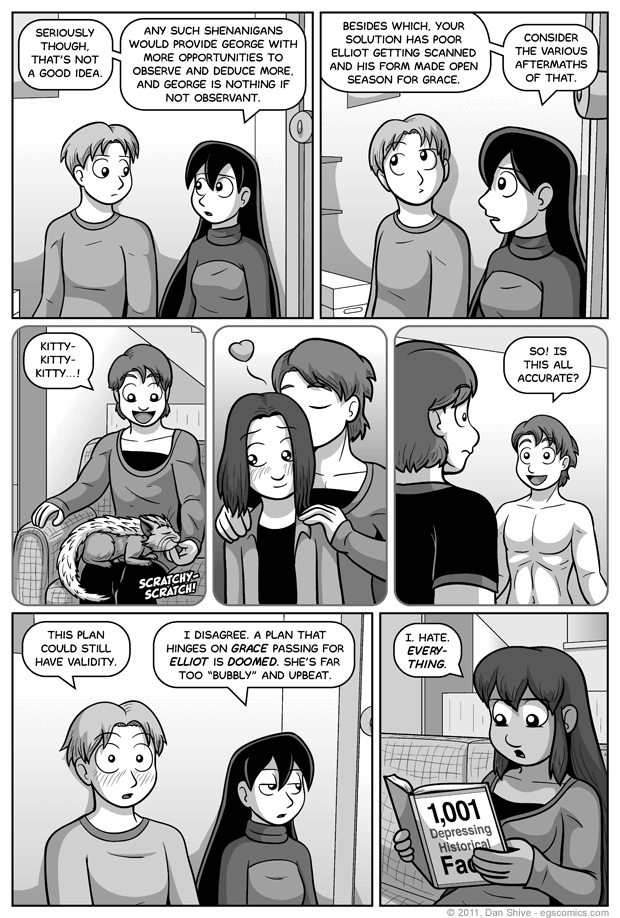 Posted February 7, 2011 at 1:00 am
Prior to making this comic, I was struck with basically two choices: have Susan go into greater detail about all the ways Justin's plan could horrible backfire, or have her be vague about it and have Grace-Elliot based fantasies. Guess which option I went with.

Panel three obviously has the potential to remind one of the comic that must not be named, but Grace has evidently mastered the art of not scaring poor Jeremy. I originally pictured her scratching the top of Jeremy's head, but then I remembered certain defining physical characteristics of Jeremy's that made that seem like a bad idea.

What I find fascinating about panel four is that, due to it being Justin's fantasy, Justin's view of Tedd dictated how Tedd would respond to Grace-Elliot's advances, and liking them somehow seemed to be the right answer. Me-thinks Justin has his own theories about Tedd. It's weird when characters reach conclusions on their own like that.

Speaking of conclusion reaching, one can conclude for themselves how much Grace-Elliot is actually wearing in panel five, but given that it's Justin's fantasy, I'm going to go out on a limb and assume "long pants" isn't the right answer.

It's been commented on when I've done previous comics with shirtless males, but it's well-documented that I don't draw nipples on them. There are a few reasons for this, the most prominent being that they stand out a bit too much when I try to include them. They look fine if I'm sketching, but in ink, they're like beacons that draw the eye in like some sort of whirlpool. Really not what I'm going for, there.

The excuse I always give, however, is that since I don't ever show female nipples, I won't show male ones, either! It's a rationalization, certainly, but there is a twisted sort of sense to it.

It's probably pretty easy to recall that Grace was none-too-thrilled to learn about World War 2, but it's worth a mention that she's only recently started learning about history in general. She's apparently not pleased thus far. I can sympathize.