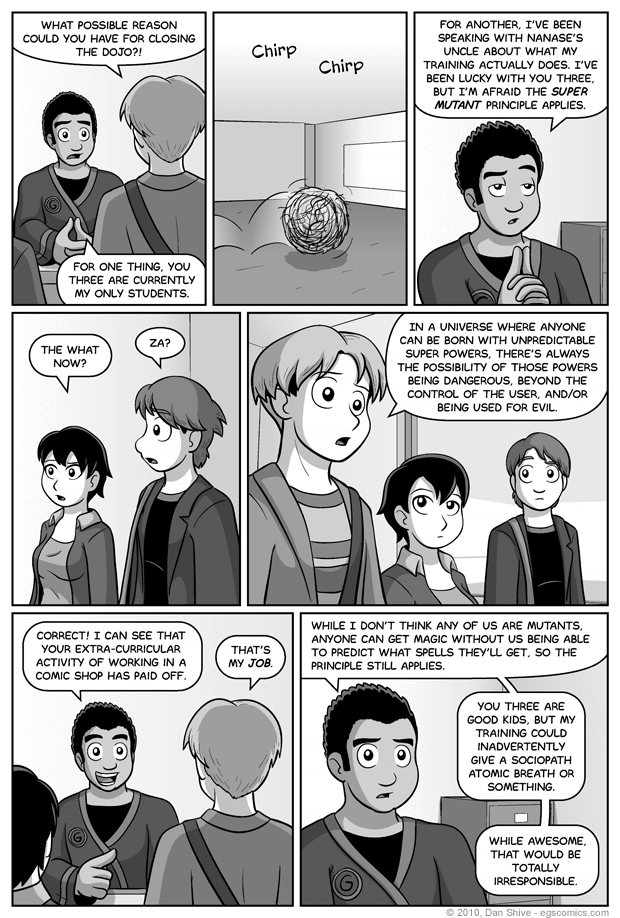 Posted August 25, 2010 at 1:00 am
Given that Moperville is somewhere in the American Midwest and panel two is indoors, that is some VERY determined tumbleweed.

For those who haven't been paying attention (SHAME!), Nanase is Tedd's cousin, meaning her uncle is Tedd's dad, Mr. Verres. I would have just had Greg say "Mr. Verres", but with Nanase there, "uncle" seemed much more natural.

While the comic has previously claimed that there are other students and at least one has been shown (other than Eric), the idea here is that Greg has had trouble keeping, and getting new, students. Elliot, Justin and Nanase have obviously stuck around, but the training has actually worked for them. As hinted at earlier in this storyline, they're the only ones other than Greg who have had much luck on the special abilities side of things.

The "Super Mutant Principle" is inspired by pretty much any super hero canon involving people being inexplicably born with seemingly random powers, most notably (as far as I'm concerned) X-Men and Heroes.

A lot of fear people have in such universes is simply the unpredictability of those powers. I'd like to think that I, if a non-mutant in such a universe, wouldn't be an anti-mutant hate-monger. The thought that any random person in a mall could potentially be capable of blowing up said mall at will, however, would be worrisome (and ultimately make the Communist scare look tragically quaint).

If all potential abilities were known, predictable, and there was no chance of something catastrophic, there would be much less to fear and greater ease of keeping things under control.